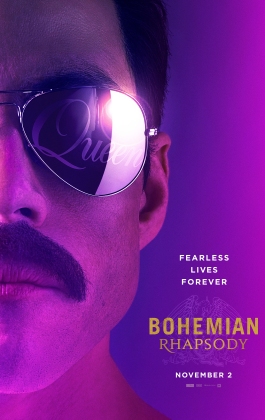 Twentieth Century Fox, New Regency and GK Films will expand “Bohemian Rhapsody,” Golden Globe winner for Best Picture (Drama), starring Rami Malek, Golden Globe winner for Best Actor (Drama), to more than 1300 theaters in the U.S. and Canada this Friday, January 11.  More than 750 of the locations will be playing a never before experienced “sing-along” version of the foot-stomping celebration of Queen, their music and their extraordinary lead singer Freddie Mercury.

Chris Aronson, Twentieth Century Fox President of Domestic Distribution said, “We are delighted to give audiences the opportunity to see this outstanding Golden Globe-winning film featuring Rami Malek’s amazing Golden Globe-winning performance in theaters all over the US and Canada in both its original form and in a never-before-experienced “sing-along” version.”

SYNOPSIS: BOHEMIAN RHAPSODY is a celebration of rock band Queen and its incendiary lead singer Freddie Mercury (played by Rami Malek, in a tour-de-force performance). With an original screenplay by Anthony McCarten (The Darkest Hour, The Theory of Everything), and story by McCarten and Peter Morgan (The Queen, The Crown), the film traces the rise of the group and its frontman, who so brazenly defied stereotypes and shattered convention. Though Queen reached staggering global success through their iconic songs (including We Are The Champions, Somebody to Love, Don’t Stop Me Now and We Will Rock You) and their revolutionary sound and style, it was not without its obstacles.  Mercury – amidst personal struggles – famously chose to abandon the group in pursuit of a solo career. His eventual reunion with the band at Live Aid 1985 went on to be considered one of the greatest performances in the history of rock music, though this time in Mercury’s life also was marked by his tragic battle with AIDS.