Aviron Pictures has released the teaser-trailer for the studio’s forthcoming film AFTER. The film is based on Anna Todd’s best-selling novel of the same name, which became a publishing sensation after crashing the social storytelling platform Wattpad due to overwhelming popular demand.

SYNOPSIS: Based on Anna Todd’s best-selling novel which became a publishing sensation on social story telling platform Wattpad, AFTER follows Tessa (Langford), a dedicated student, dutiful daughter and loyal girlfriend to her high school sweetheart, as she enters her first semester in college. Armed with grand ambitions for her future, her guarded world opens up when she meets the dark and mysterious Hardin Scott (Tiffin), a magnetic, brooding rebel who makes her question all she thought she knew about herself and what she wants out of life.

AFTER will open in theaters everywhere on April 12, 2019! 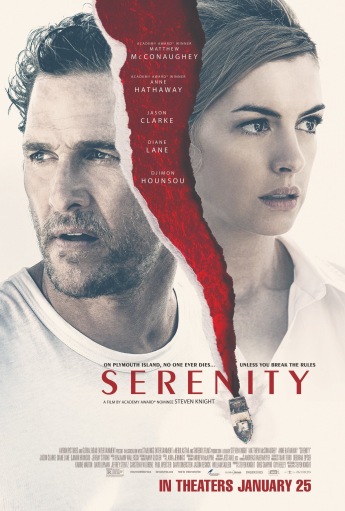 Aviron Pictures has released a new trailer for SERENITY, a daring original thriller from Oscar nominated director Steven Knight. The film stars Matthew McConaughey as a fishing boat captain whose quiet life is shattered when his ex-wife tracks him down with a desperate plea for help. Also starring Anne Hathaway, Jason Clarke, Djimon Hounsou, Jeremy Strong and Diane Lane.

SYNOPSIS: From the creative mind of Oscar nominee Steven Knight comes a daringly original, sexy, stylized thriller. Baker Dill (Academy Award winner Matthew McConaughey) is a fishing boat captain leading tours off a tranquil, tropical enclave called Plymouth Island. His quiet life is shattered, however, when his ex-wife Karen (Academy Award winner Anne Hathaway) tracks him down with a desperate plea for help. She begs Dill to save her – and their young son – from her new, violent husband (Jason Clarke) by taking him out to sea on a fishing excursion, only to throw him to the sharks and leave him for dead. Karen’s appearance thrusts Dill back into a life he’d tried to forget, and as he struggles between right and wrong, his world is plunged into a new reality that may not be all that it seems.

SERENITY will open in theaters everywhere on January 25, 2019!