This review will be a bit different because my niece was actually the one who attended. I wanted to have her explain the experience in her own words because she’s the target demographic (even though I really enjoyed this album myself). This tour, Flicker Sessions, is promoting the debut solo album from Niall Horan (1/4 of One Direction).

I can tell you that the doors to the venue (The Fillmore Miami Beach)  opened about an hour before the show started, which was about 7pm. The scheduled start time was 8pm and my niece was out at 10:15pm.

Also, be sure to take advantage of the Flicker Sessions filters available on SnapChat while you’re waiting! Here are the two that were available for my niece here in Miami: 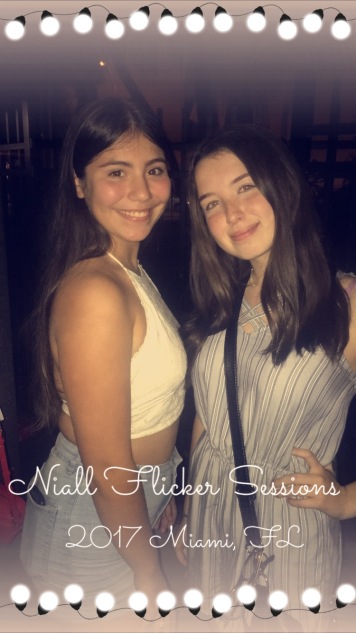 Here’s Briana with her thoughts on the show:

I was nervous to see Niall perform by himself because I’m so used to seeing him with the other guys in 1D, but I am so proud of him! Proud mom! The stage didn’t have a big, elaborate set-up and I really liked that. It had a chill vibe that went well with his new music. The sound was great at the venue and Niall’s vocals were on point throughout the whole show (I’m not surprised!). One of my favorite parts was when he stopped singing and playing the guitar and let the audience sing the words back to him. He just looked so happy to be doing this. We almost cried when he started singing “Fool’s Gold” too! It was so emotional.

This was my first time at The Fillmore, but I really liked it. I even heard that the line for Niall’s show was longer than any other show there. I’m not sure how accurate that is, but either way, it was way worth the two hours we spent in line! Some people even started lining up at 5am! We weren’t as close to the stage as we hoped, but just being there at all was such a great experience. While we were in line, someone passed around these bright pink papers shaped like light bulbs that said to hold them in front of our phone flashlights during “This Town” and that was awesome to see. I’ve seen people plan fan projects like that at other shows, but this was the first one I got to participate in.

Gavin James opened up for Niall and he reminded me a lot of Ed Sheeran. I thought he did really well. I highly recommend getting tickets to see Niall live because it really was a great night out!