Hispanic Heritage Month is recognized annually in America from mid-September through mid-October. It is a month where recognition is given to all Hispanics living in this country, especially those who have made a positive impact and contribution to society while embracing their culture. With the increase of the Hispanic population in America and the generational growth we have seen that it has become difficult to keep our children grounded and maintain our traditions, values and cultures. Yet it is imperative for Hispanic families to instill in their children these traditions at an early age. As a proud Latina it is my diverse culture of which I am most proud of. It is this pride that I too will share with my children someday. 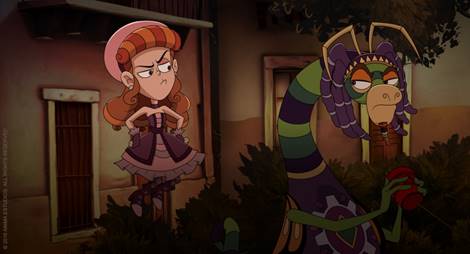 So how do we effortlessly pass on and instill our customs and traditions to our children? There’s various ways, but one of the first places to start is to inculcate the use of our language. Speaking to our children in Spanish at a young age will not only give them a competitive advantage in the long run, but it will organically immerse them into our culture. Nowadays, there are many tools that can help us really inculcate the use of Spanish in our homes – from bilingual books, to educational videos, mobile apps, and even Hollywood films. When it comes to movies, those that are dubbed in Spanish are a great resource. Learning to listen is essential to comprehending another language and by viewing a film in Spanish our children will absorb not only our culture but the language.

With that in mind, on October 14 Pantelion Films is releasing the animated film, La Leyenda Del Chupacabras. This film not only promises to entertain families from all over the United States, but also to be a good tool for our children in experiencing one of our culture’s well-known folktales in Spanish. The storyline follows the character of Leo and his friends as they embark on a new adventure and encounter the well-known mythical creature of El Chupacabras. Abandoned to their fate, Leo and the rebels must fight the El Chupacabras and escape the convent they are in. As Leo struggles to survive he will discover the secret behind El Chupacabras and will have to make the most difficult decision of his life. The film will be available in select cities with subtitles.

You can view the trailer here:

This film by Anima Studios is one of many animated series that focus on popular Latino folktales including La Leyenda De Las Momias and La Leyenda de la Llorona. These films are definitely a perfect tool to practice the use of Spanish language and also provide a look into our culture, plus they’re super cute!

What are other ways you instill the use of Spanish and your Hispanic background to your kids?

Hey everyone! Check out the first trailer of Lionsgate and Pantelion Films’ upcoming animated release, La Leyenda del Chupacabras. This family-fun film will make its theater debut on October 14!

SYNOPSIS: After his adventures with the mummies of Guanajuato and of being in the middle of the independence war, Leo San Juan is taken prisoner when he gets mistaken for an insurgent rebel by the royalist army soldiers while on his way back to Puebla. While locked in an old abandoned convent among other rebels, a frightening winged monster appears next to them: El Chupacabras, who attacks prisoners and guards alike. Abandoned to their fate, Leo and the rebels must fight the monster and escape before the royalists blow up the convent. As he struggles to survive he will discover the secret behind El Chupacabras and will have to make the most difficult decision of his life.