The King’s Parade have released their brand new EP ‘Woman’. The four-track EP features the acclaimed title-track, the new single ‘The Look’ and previously unreleased tracks ‘Mirror’ and ‘Lemon Zest’.

Regarding the new EP frontman Olly Corpe says, “This EP is a reflection of the past year together as a band, but also an insight into how our writing has evolved since we started. We’ve grown with our sound and as we’ve felt more comfortable with the music, we’ve managed to let loose and be more expressive in this record. ‘Woman’ is a cry out for change. ‘The Look’ revisits past jealousy and bad habits. ‘Mirror’ is about realising you’re the only person in the way of your own success and ‘Lemon Zest’ is a comment on how artists are doing anything and everything to get their voice heard. All of these tracks have formed an EP which introduces ‘our sound’ but more importantly announces the start of something much bigger.”

The EP’s title track was released earlier this year and addressed the issue of gender imbalance, which led the band to be featured as BBC Introducing’s ‘Artist Of The Week’ and shortlisted for the ‘UMA Choice Award’ at the forthcoming Unsigned Music Awards 2018.

The Woman EP follows from the highly praised Haze EP last year, which saw them receive support from the likes of The Independent, Wonderland and BBC 6Music among many others.

Alongside the new EP release The King’s Parade have been announced to play a string of summer festivals across the UK and Germany. Full details can be found below:

“A soulful blend of indie textures, ‘The Look’ is about the more destructive elements in their psyche, and how they can move past them.”
Clash

“A rich slice of alt-soul”
Mahogany

“Sure to leave a major mark across the indie music scene.”
Happy Magazine 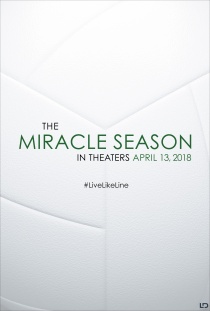 A teammate they’ll never forget. A season they never expected.

SYNOPSIS: Based on the inspiring true story of West High School girls’ volleyball team.  After the tragic death of the school’s star player Caroline “Line” Found, the remaining team players must band together under the guidance of their tough-love coach in hope of winning the state championship.

THE MIRACLE SEASON is available in theaters everywhere on April 13, 2018!