SYNOPSIS: The stakes are higher than ever for the time-traveling exploits of William “Bill” S. Preston Esq. (Alex Winter) and Theodore “Ted” Logan (Keanu Reeves) as the now middle aged best friends set out on a new adventure to seek the song that will set their world right and bring harmony in the universe, helped by their daughters (played by Samara Weaving and Brigette Lundy-Paine), a new batch of historical figures, and a few music legends.

The first look images also include a peek into the role of Death reprised by actor William Sadler and newcomer Scott Mescudi (Kid Cudi). 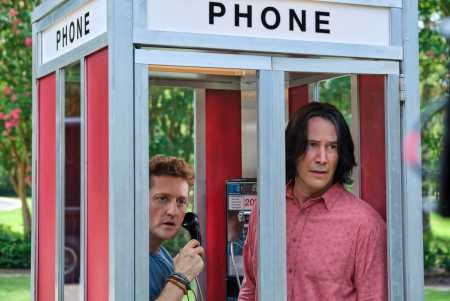 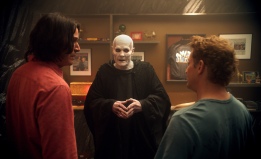 On the night of April 19, 1989, a brutal rape occurred in Central Park, setting off a chain of events that went on to capture the nation’s attention and forever alter the lives of five teens who were wrongly accused of the crime.  Thirty years later, When They See Us highlights one of the most shocking and catalyzing instances of injustice in recent decades. Academy Award® Nominee Ava DuVernay brings the full stories of Antron McCray, Yusef Salaam, Raymond Santana, Jr., Kevin Richardson and Korey Wise to life as they unfold over the four part limited series.  When They See Us will be released on Netflix on May 31.

About When They See Us:

Based on a true story that gripped the country, When They See Us will chronicle the notorious case of five teenagers of color, labeled the Central Park Five, who were convicted of a rape they did not commit. The four part limited series will focus on the five teenagers from Harlem — Antron McCray, Kevin Richardson, Yusef Salaam, Raymond Santana and Korey Wise. Beginning in the spring of 1989, when the teenagers were first questioned about the incident, the series will span 25 years, highlighting their exoneration in 2002 and the settlement reached with the city of New York in 2014.

When They See Us was created by Ava DuVernay, who also co-wrote and directed the four parts.  Jeff Skoll and Jonathan King from Participant Media, Oprah Winfrey from Harpo Films, and Jane Rosenthal, Berry Welsh and Robert De Niro from Tribeca Productions executive produced the limited series alongside DuVernay through her banner, Array FilmWorks. In addition to DuVernay, Attica Locke, Robin Swicord, and Michael Starrbury also served as writers on the limited series.

About the Social Impact Campaign:

Alongside the release of When They See Us, Participant Media, in collaboration with Color Of Change, Vera Institute of Justice, Institute for Innovation in Prosecution at John Jay College, and The Opportunity Agenda, among others, will launch a social impact campaign aimed at supporting the work of the criminal justice reform movement. The campaign will focus on shifting perceptions of Black and Brown youth in media coverage and helping prosecutors with new approaches rooted in human dignity and racial equity. The series debuts globally on Netflix on May 31.

WHEN THEY SEE US | Official Channels