I had the privilege of catching one of Jeff Dye’s shows at the Palm Beach Improv this weekend, and it did not disappoint!

Several months ago, I decided to watch a new show called ‘I Can Do That’ OnDemand and was hooked.  The show normally airs on NBC, and has just been renewed for a second season.  You can find more information about the show HERE.  It was this particular show that introduced me to my new favorite comedian, Jeff Dye.  Some of you might’ve seen him on shows like Girl Code and Money from Strangers on MTV, but, as mentioned in a previous post…I stopped watching MTV when they stopped playing music lol.  Jeff was also a finalist on Last Comic Standing (also on NBC).

When I heard Jeff would be doing some shows in Florida, I had to be there!  So I dragged my brother and my best friend with me and we drove up to West Palm Beach from Miami for the first of two shows he’d be headlining on Saturday.  Now, that was my first mistake lol.  Choosing to go to the early show rather than the later one!  The early show looked like a Century Village field trip!  Not that that’s a problem, BUT they didn’t seem to get a lot of the jokes.

The venue was great and so were the opening comedians, Jordan Garnett and Ramon Garcia (both locals).  As Ramon was making everyone cry of laughter, I noticed Jeff creeping behind us sitting at a table by himself.  Despite my best friend telling me to go talk to him, I didn’t.  I mean, I do think he’s awesome, but I’m sure he wanted time alone, right??  🙂

Anyway, Jeff went up on stage and made us laugh the entire time.  His jokes were on point, and even his banter with the drunk old lady in front of us was hilarious.  The crowd was slightly awkward as everyone looked around wondering what a NuvaRing was, but I don’t even care because I got it and thought he was great!  What makes him even more amazing is the fact that he took time out of his show to thank the wait staff at the venue.

When the show was over, my 31 year old self got nervous, hoping we’d be able to meet him.  Unfortunately, Jeff went right into the green room and the old folks all left right away!  My brother went over and asked someone who worked at the Improv if Jeff would be coming out to meet people, and the guy went to check.  He went to the green room and quickly returned with Jeff.  He came over and spoke to us for about 5 minutes, recognized me from Instagram (not sure if that’s a good thing haha), took pictures with my best friend and I, thanked us for coming and went back into the green room.

Needless to say, my night had been made!  It sucks to have high expectations for how someone would be in person without cameras on them and have them be douchebags, but Jeff exceeded my expectations.  He was so nice, and even though he didn’t have to come out to meet us, he did and was awesome.  Definitely gained him two new fans in my brother and best friend.

So, if you’re looking to have some laughs, please check him out on NBC’s ‘I Can Do That’, you can find hilarious interviews with him on YouTube, and he has a comedy album out on iTunes called,’ Welcome to my Brain.’  As if that weren’t enough, he just finished filming a new show on NBC (yes, he might be the new NBC poster child) called ‘Better Late Than Never’ which will also star Terry Bradshaw, William Shatner, Henry Winkler and George Foreman.  With that lineup, we’re sure to have some laughs!  Now that I’ve fully endorsed my favorite comedian, do yourself a favor and look him up!

Here is his Official Site. 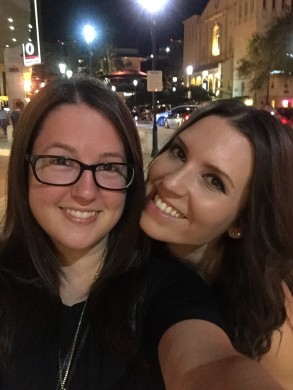