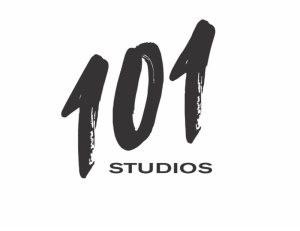 101 Studios has optioned all rights to the book ‘Skin Tight: The Bizarre Story of Guess vs. Jordache’ which is slated to be developed into a series.

SYNOPSIS: SKIN TIGHT tracks the epic, no-holds-barred “Designer Jeans War” that erupted between two fiercely ambitious families, each determined to win at even the most outrageous cost.  It all begins in 1982, as the multi-billion-dollar fashion denim market is taking off like a shot.  In New York, the three Nakash brothers, founders of formfitting Jordache jeans, decide to invest in an upstart California company named Guess, run by the two Marciano brothers.  But what seems like an ordinary business deal soon becomes an all-out, unstoppable blood feud.  When the deal goes bad, the brothers get personal.  And so begins an all-consuming, seven-year vendetta, as the Nakashes and Marcianos each tap their vast wealth to bring in a rogue’s gallery of lawyers, G-men, politicians and private detectives to prove their counterparts are corrupt.  The result is an outsized saga of unbridled greed, family loyalty and corporate vengeance.
About 101 Studios:
101 Studios is a global entertainment company dedicated to the acquisition, financing, development, production and distribution of high-caliber, creator-driven storytelling. Formed by veteran film and television executives David Glasser and David Hutkin in 2019, the studio empowers content creators through first-class collaboration and innovation. Inaugural releases include Alfonso Gomez-Rejon’s THE CURRENT WAR, featuring Benedict Cumberbatch and Michael Shannon, BURDEN
featuring Forest Whitaker and Garrett Hedlund and Taylor Sheridan’s modern-day western series for Paramount Network YELLOWSTONE, starring Kevin Costner. 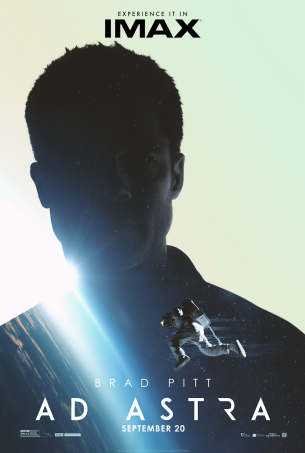 SYNOPSIS: Astronaut Roy McBride (Brad Pitt) travels to the outer edges of the solar system to find his missing father and unravel a mystery that threatens the survival of our planet. His journey will uncover secrets that challenge the nature of human existence and our place in the cosmos.

Director James Grey worked with DP Hoyte van Hoytema to establish a look for the movie based on Kodak stock images from the Apollo 11 through 17 lunar missions.

AD ASTRA arrives in theaters everywhere on September 20, 2019 from The Walt Disney Studios.

First things first . . . HOLY SHIT the Jonas Brothers still know how to put on an incredible show. The whole thing was high energy from the moment they took the stage!!

I just want to give a little backstory to my attending this show. 10 years ago, I took my niece to her first concert here in South Florida. She was 5 and she was decked out in a Jonas Brothers t-shirt, Jonas Brothers press-on nails and Jonas Brothers sandals. You guessed correctly, her first concert ever (at 5 because I’m the coolest aunt ever) was the Jonas Brothers. When the guys announced that they were getting back together, I knew I was going to have to sell a kidney to get tickets for the niece to see them again, almost exactly 10 years later! & that’s what I did (minus the selling of my kidney on the black market lol).

I also want to state that the marketing team for the Jonas Brothers deserve a raise! Their cryptic posts leading up to the show had fans going nuts trying to figure out the set list and what surprises would be coming next. The intrigue for all things Jonas has been heavy for months now and that is extremely good for the brand. 😉

The show started at about 7:45 with Jordan McGraw, who played a pretty short set. Bebe Rexha came out next and played her hits, which got the crowd pumped up even more for the guys.

While the crew was setting up the main stage, the crowd started SCREAMING and everyone was turned towards the back of the arena. The Jonas fam all walked in and grabbed seats in the VIP Section, but you would’ve thought the guys had walked out! It was really nice to see a packed arena mostly comprised of young girls all cheering for the guy’s wives, daughters, family and friends rather than hating on them for changing their relationship status haha. Kevin’s daughters must’ve thought it was the coolest thing ever! 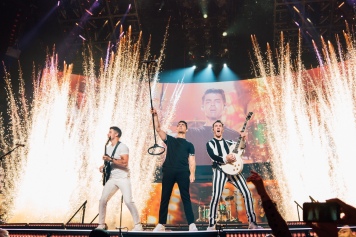 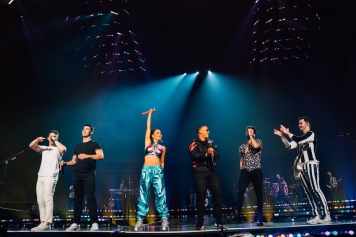 Anyway, the guys came on at about 9:30pm and it was absolutely insane. They had the perfect mix of old hits sprinkled with new songs off of their Happiness Begins album. There was a mini stage set up in the back of the arena, in the VIP section, so every seat in the arena was a good one. Whether you were in the back sections or the front, you got a chance to see the guys just a little bit closer than you would with just a regular end-stage setup. The music was loud, the vocals were on-point and the whole production was very well thought out and put together. You can tell that a lot of preparation went into this tour and everything was executed perfectly. My only wish is that is was being filmed! Who knows, with all the surprises they’ve had for everyone lately, maybe it was. The show ended at about 11:20pm.

At one point towards the end of the show, the guys brought out Sebastian Yatra, Natti Natasha and surprised everyone by bringing out Daddy Yankee for a special performance of “Runaway”. Between special guests, confetti canons, pyro, fireworks and those silly inflatable dancing creatures, the show was just a party from start to finish. Even outside of the arena was decorated with balloons and made it feel like a party despite the heat and humidity haha. There were also little photo op areas throughout the hallways of the arena.

I also want to point out that I’ve been to A LOT of concerts, and this one might be at the top as far as high-energy is concerned. I mean that sincerely. The crowd was jumping and screaming and singing the words back to the guys the entire time and all I kept thinking about was their documentary, where Kevin asked if anyone would care that they were getting the band back together. After seeing the first show of the Happiness Begins Tour last night here in Miami, I hope that question has been answered for him and erased any doubts they might’ve had.  It’s obvious that the fans are here to stay!

I HIGHLY recommend checking this show out if you get the chance. The tickets are a big pricey, but they’re honestly worth it. A huge congratulations goes out to the guys on the success of their first show back and well wishes for the rest of the tour!

Check out the set list for our show below:

We are the Jonas Brothers (video intro)
Rollercoaster
S.O.S.
Cool
Only Human
Strangers
That’s Just the Way We Roll
Fly With Me
Used to Be
Hesitate
Can’t Have You
Jealous
Cake by the Ocean
Comeback
When You Look Me in the Eyes
I Believe
Mandy / Paranoid / Got Me Going Crazy / Play My Music (medley)
Hold On / World War III / Tonight (medley)
Runaway (with Sebastian Yatra, Daddy Yankee and Natti Natasha)
Lovebug
Year 3000