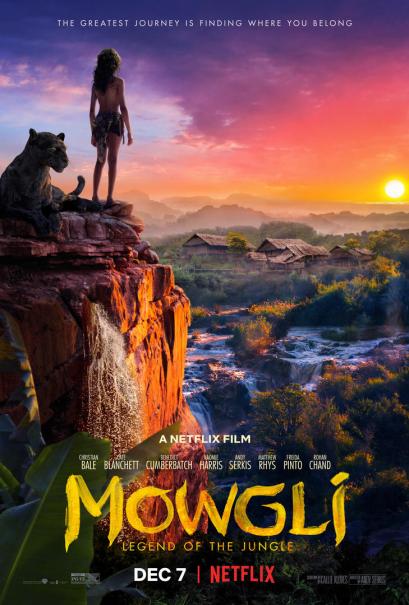 The Greatest Journey is Finding Where You Belong

In this new featurette, go behind the scenes of actor and director Andy Serkis’ MOWGLI: Legend of the Jungle. Watch how Andy and the cast, including Rohan Chand, Christian Bale, and Benedict Cumberbatch, used performance capture combined with top-notch animation and visual effects to create the visually stunning world of MOWGLI.

Acclaimed actor and director Andy Serkis reinvents Rudyard Kipling’s beloved masterpiece, in which a boy torn between two worlds accepts his destiny and becomes a legend. Mowgli (Rohan Chand) has never truly belonged in either the wilds of the jungle or the civilized world of man. Now he must navigate the inherent dangers of each on a journey to discover where he truly belongs. Christian Bale, Cate Blanchett, Benedict Cumberbatch, Andy Serkis, Freida Pinto, Rohan Chand, Matthew Rhys and Naomie Harris lead an all-star cast in this visually spectacular and emotionally moving adventure.

A-LIST HOLLYWOOD AND BOLLYWOOD STARS WALK THE RED CARPET AT THE MOWGLI: LEGEND OF THE JUNGLE WORLD PREMIERE IN MUMBAI

Mumbai hosted its first-ever global premiere for a major Hollywood film this week, as Netflix showcased Mowgli: Legend of the Jungle to an exclusive audience. 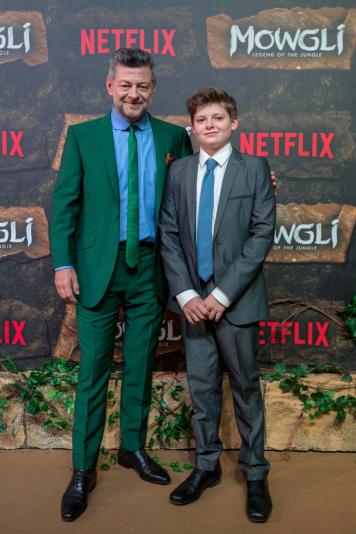 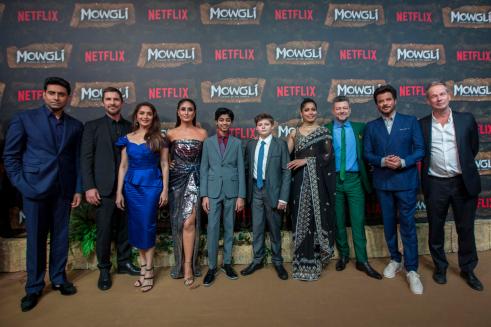 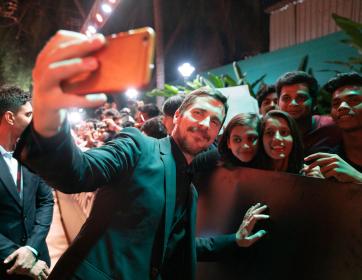 The Mumbai event marked the beginning of the Mowgli global tour, with screenings taking place in London and Los Angeles, before the movie premieres globally to Netflix members on December 7, 2018.

About MOWGLI: LEGEND OF THE JUNGLE
Acclaimed actor and director Andy Serkis reinvents Rudyard Kipling’s beloved masterpiece, in which a boy torn between two worlds accepts his destiny and becomes a legend. Mowgli (Rohan Chand) has never truly belonged in either the wilds of the jungle or the civilized world of man. Now he must navigate the inherent dangers of each on a journey to discover where he truly belongs. Christian Bale, Cate Blanchett, Benedict Cumberbatch, Andy Serkis, Freida Pinto, Rohan Chand, Matthew Rhys and Naomie Harris lead an all-star cast in this visually spectacular and emotionally moving adventure.

Acclaimed actor and director Andy Serkis reinvents Rudyard Kipling’s beloved masterpiece, in which a boy torn between two worlds accepts his destiny and becomes a legend. Mowgli (Rohan Chand) has never truly belonged in either the wilds of the jungle or the civilized world of man. Now he must navigate the inherent dangers of each on a journey to discover where he truly belongs. Christian Bale, Cate Blanchett, Benedict Cumberbatch, Andy Serkis, Freida Pinto, Matthew Rhys and Naomie Harris lead an all-star cast along with newcomer Rohan Chand in this visually spectacular and emotionally moving adventure.

MOWGLI: LEGEND OF THE JUNGLE will have exclusive limited theatrical engagements starting November 29 in Los Angeles, New York, San Francisco, and London.  The film will be released globally on Netflix on December 7 and will have an expanded theatrical release in additional theaters in the U.S. and UK.

I got to see a 3-D screening of THOR: RAGNAROK last night here in Miami, and I have to say . . . this might just take the top spot for me! It’s definitely the most entertaining of the Thor movies.

Now, I might be a bit biased because I love me some Chris Hemsworth, but this movie had the perfect balance of action and comedy that I felt set it apart from the others. I don’t remember the other films being consistently funny throughout the entire two hours, but this one had everyone laughing (in a good way) for a lot of it. The interactions between Thor and Hulk were some of the best moments for me. I also loved the female presence in this one. Cate Blanchett as Hela aka the Goddess of Death, and Tessa Thompson were such bad asses in this movie and it’s nice to see women being represented as such in a genre geared towards boys and men. Women enjoy these characters and films too, so it’s nice to see them being included and represented as strong, powerful beings that can kick ass with the best of them!

The cast was fantastic, and there were even a few surprise appearances thrown in that made it even better. I’m about to throw in a spoiler alert regarding those appearances, so if you don’t want to know, skip through to the synopsis.

SYNOPSIS: Imprisoned, the mighty Thor finds himself in a lethal gladiatorial contest against the Hulk, his former ally. Thor must fight for survival and race against time to prevent the all-powerful Hela from destroying his home and the Asgardian civilization.

This is definitely my favorite Thor movie. If you’re contemplating whether or not to see it in 3-D, I say do it! I wear glasses all of the time, so it’s a bit of a hassle having to put those 3-D glasses on top of my own and it distorts the picture just a bit BUT the effects were great and it was still a cool experience. Whether it’s 3-D or not, I strongly suggest seeing this one in the theater. Check it out for yourself and let me know your thoughts on this comedic direction!

Keisha and I decided to record a podcast about Marvel news for you! Unfortunately, I’ve been extremely busy between finals week at school (yes, I’m 32 and still in school lol) and moving into my new place, so I’m not as informed as she is hahaha.  She wanted to hear my reactions to all of the news, so this is what we did:


At the Movies w/Keisha & Kristin: This Week in Marvel – Podcast

Let us know your thoughts and feel free to send us suggestions for anything you would like us to check out and review! 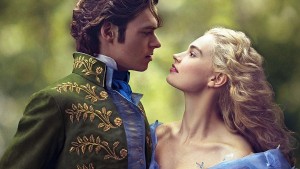 There are many similarities between this live action adaptation and the 1950 animated version. This film begins with a glimpse into young Ella’s life before both of her parents passed away. They instilled in her the importance of being kind and believing in magic. With both of her parents dying (at different stages of Ella’s life), the film’s cheery opening takes a darker turn. When her stepmother, Lady Tremaine, and her wicked daughters learn of her father’s death, they begin to treat Ella horribly. One of the main differences in this film is that we also get a glimpse into the prince’s life and his relationship with his father, the King. Upon meeting Ella in the forest one day, the prince (Kit – who Ella believes to simply be an apprentice) urges his father to have an open invitation for all available women to the royal ball. While his father and the Grand Duke insist that he marry a princess for advantage, Kit just wants to see Ella again. When Lady Tremaine forbids Ella from attending the ball, she receives the bippity boppity magic from her fairy godmother and sets off to find her friend, the apprentice. When she arrives, the prince dismisses the woman chosen for his first dance, and invites Ella, revealing his true identity as the prince. They quickly fall in love as he shows her the palace grounds and she runs off at the stroke of midnight before the magic wore off, leaving behind the famous glass slipper. For whatever the reason, even when the magic wears off, the glass slippers don’t return to their original form. Either way, Ella hides the remaining glass slipper under the floorboard in the attic. Kit’s father grows ill and, after seeing his son’s love for Ella before passing away, tells him not to marry for advantage and instead, to marry for love. They arrange a kingdom-wide search for the girl whose foot fits the forgotten glass slipper. When Ella hears the news, she runs to the attic to find the one she hid, only to find Lady Tremaine holding it in her hand. Realizing it was her at the ball, she locks Ella in the attic, but when Gus Gus and the mice unlock the window, the royal entourage hears Ella singing and realizes there’s another woman in the home. The prince reveals himself and is reunited with Ella, an honest country girl who loves him. The two are married and live happily ever after, as we all know.

The subtle changes and additions to this adaptation were welcomed because seeing Ella with her parents gave a bit more of a back story to her relationship with them and the struggle she faced in order to be kind to Lady Tremaine and her minion daughters. Seeing a bit of the prince’s relationship with his father was also a great addition. The casting in this film was excellent and even though they didn’t cast a well known starlet to play Cinderella, Lily James truly delivers. Her chemistry with Richard Madden was noticeable and adorable, and Cate Blanchett was the perfect person to play the evil Lady Tremaine.

Overall, I was pleasantly surprised with this film. I thought the dresses at the royal ball could’ve been a bit nicer, but I suppose they were borderline hideous in order to make Cinderella’s beautiful blue gown stand out even more. As mentioned, the casting was great, the chemistry between the characters was excellent and the overall production of the film was beautiful. I can honestly say I give it 4 out of 5 stars. – Kristin (@kristin0409)