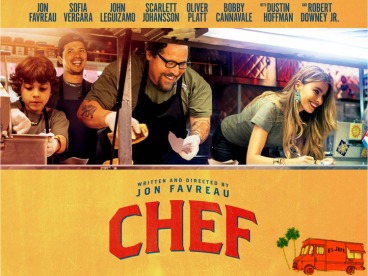 First off, Happy Father’s Day to all the dads out there (and to all the single moms playing both roles)!

As some of you may know, my dad passed away 2 years ago, so we celebrate my brother on Father’s Day, who is a father to my wonderful, sometimes annoying, niece. As part of his gift, I finally sat down to watch a movie and CHEF was his choice.

I have to say I’m glad he chose this one. Sadly, I’d never heard of this film, but I thought it was fantastic! It really exemplifies how someone can take a situation that is no longer making them happy, and turn things around for the better.

The movie follows celebrity chef, Carl Casper, as he runs the kitchen at an LA restaurant owned by Riva (Dustin Hoffman). Riva wants Carl to stick to his usual menu, but when a popular food critic arrives at the restaurant Carl and his team want to switch things up to make their menu more creative. This idea doesn’t sit well with Riva, and their plan is shut down. The critic, Ramsey Michel (Oliver Platt) destroys Carl’s cooking and the horrible review goes viral.

Carl gets schooled by his 10-year-old son, Percy (Emjay Anthony), on how Twitter and social media works. With little to no knowledge of social media, Carl engages Ramsey in a Twitter feud that eventually results in Carl leaving Riva’s restaurant.

At the suggestion of his ex-wife, Inez (Sofia Vergara), Carl flies with her and Percy to Miami, where his love for cooking first began. He meets with Inez’s other ex-husband, Marvin (Robert Downey, Jr.), and buys a food truck in order to get back to making the type of food that makes him happy.

With the help of his old sous chef and friend, Martin (John Leguizamo), and Percy, Carl sets off on a cross-country trip in the food truck. Percy’s use of technology turns the new food truck into a sought-after establishment.

In my opinion, this movie has great storylines that intertwine to give viewers the motivation to find what truly makes them happy. Carl takes an incident that hurts his career and stifles his creativity, and turns it around into something that positively impacts all aspects of his life. It sends the message that things aren’t always easy, but with hard work, dedication, and a dash of positive, creative energy, true happiness is absolutely possibly.

The film also features a ton of Hispanic flavor that really showcases the atmosphere here in Miami. An underlying moral of the story is: If you haven’t tried a TRUE Media Noche, do yourself a favor and TRY ONE!! Side note: Yuca Fries and Tostones should also be on your list of foods to try! What can I say…my Cuban peeps know what they’re doing! lol.

So check out the film on Netflix and, as always, let me know what you thought! You can thank me later for this little hidden gem!