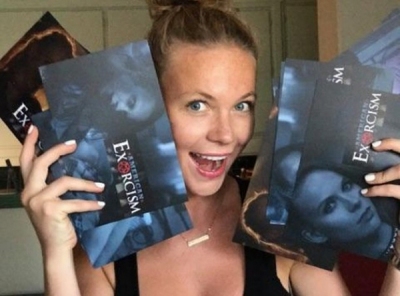 “American Exorcism” lead actress Kate Tumanova attended ScareLA in support of the DVD and RedBox release of the film.

Tumanova is a fresh face to the horror genre, but fans came out in support of the talented actress and were able to meet and greet as well as get an autograph poster or a #KateTumanova shirt.

“It was a great experience and I am very happy to be related to that community through my horror film ‘American Exorcism,'” Tumanova said.

For two hours Tumanova met with fans and talked to press.

Tumanova is proud of her role as Caroline as a teenager in “American Exorcism.” The teenage Caroline character has gone through some turmoil and through the film has some teenage angst that may be fueled by a possession.

This having been her first year at ScareLA Tumanova said, “I love how people are so passionate about a certain genre and all get together and have so much fun. I would love to be back next year. Everyone was so fun and people were very interested to hear about my film.”

“American Exorcism” is out now on DVD and RedBox.

Tumanova will be coming back to the horror genre once again, landing another lead role in an upcoming horror film which is now in production.

Tumanova said, “I am so excited to shoot another project and, since it perfectly fits the Scare LA set up, I will do everything I can to promote it next year.”

Mordacci discusses the wide variety of the topics that the plays deal with, being new to directing and organizing the festival and brings a surprise along for the interview.

The festival will include 13 10-minute plays in Spanish, English and of course, Spanglish that will range in topics, such as faith, immigration, infidelity, murder, treason, jugglers, hookers, luchadores and politics.

The main goal for “Short+Sweet Hollywood Latino!” is to provide a much-needed forum for expression for Latino talent, including Hansel Ramirez, Elena Rojas, Fernanda Kelly, Orlette Ruiz among many other film, TV and theater actors, writers and directors.

Recognizing the endeavor’s importance many celebrity guests will be attending to lend their support.

The program will be divided into two groups, ‘A’ and ‘B’ each day and will alternate order.

The festival’s schedule will go as follows:

“’Short+Sweet Hollywood LATINO!’ is fantastic, because it is the first short-play Latino festival being presented in L.A, a culturally-rich and talent-filled city. It will provide a forum for Latino expression and a space where all can melt together, while building a sense of belonging,” festival director Tanya Mordacci said.

Dates for the entire festival have been announced and tickets are available now for purchase.
To keep up with latest news, follow the festival on its official Facebook Fan Page.