It’s no secret that I’m a long-time music lover. I grew up in days of TRL and used to watch music videos on VH1 every morning as I was getting ready for school. MTV’s Making the Video was one of my favorite shows to watch (you know, back when they actually used to play music videos).

With that being said, I can honestly say that no music video has ever made me cry. Until yesterday. A friend of mine posted a link to a music video on her Facebook page yesterday, so I decided to check it out because Bastille & Marshmello, amiright?

This video legit made tears fall down my face. Take a minute to watch the video and then read on for some back story.

Ok, so now the back story.

I started working when I was 17. I got my first actual office job once I graduated from high school and the first thing I bought with my first decent paycheck was a puppy. We’d gone to visit a woman who bred Golden Retrievers and I fell in love with one (never mind the fact that my cell phone had fallen out of my bag right onto the head of one of the adorable little puppies and I felt like I had an obligation to choose that one because I’d probably caused some damage to its adorable little brain – update: I didn’t cause any damage). I know dog owners are biased and always claim to have the best dog ever, but we literally hit the jack pot with our Kayla. She was my first child and she was the absolute best. A year after we adopted Kayla, my niece was born and Kayla never left her side. Briana could climb on her and smack her in the face and tug at her tail, but Kayla never went in defense mode. Unless, that is, Briana tried to run into the street and Kayla ran up and nudged her in the butt to knock her down before she could get there.

We had 12 fantastic years with our Kayla before we found out that she was full of cancer and had to be put down. I will never forget sitting in the vet’s office watching my niece hold the paw of her first best friend. Kayla passed away 2 months before my father passed away from cancer that we didn’t know he had, so the whole time period was just an emotional roller coaster. Seeing this video made me think of the happiness Kayla brought to all of us. We’ve yet to find the nerve to adopt another one, but maybe someday we will! Here’s a pic of my first child, Kayla:

ZACH MCGOWAN, DANNY GLOVER AND DANNY TREJO AMP UP THE ACTION
IN THE GRITTIEST INSTALLMENT OF THE DEATH RACE FRANCHISE
FROM UNIVERSAL 1440 ENTERTAINMENT

UNRATED AND UNHINGED!
AVAILABLE ON BLU-RAY™, DVD, DIGITAL AND ON DEMAND ON OCTOBER 2, 2018
FROM UNIVERSAL PICTURES HOME ENTERTAINMENT

The stakes are higher than ever in the intense action-adventure Death Race: Beyond Anarchy, arriving Unrated and Unhinged on Blu-ray™ combo pack, DVD, Digital and On Demand October 2, 2018, from Universal Pictures Home Entertainment, in association with Impact Pictures/Chestnut Productions. The wildly anticipated next installment of the popular Death Race franchise, this Universal 1440 Entertainment original production brings fans along for the deadliest competition on wheels, where brutal fights and explosive car races abound. An action-packed thrill ride, this all-new movie is the grittiest and bloodiest installment yet!

This promotion will end Tuesday, October 9 at 10:00 AM (eastern time). Only one entry per person. No purchase necessary. U.S. residents are eligible to enter. Winners will be contacted via email. AccordingtoKristin.com and other promotional partners are not responsible for lost, stolen, or misdirected mail.

Danny Trejo returns as the ruthless bookie, Goldberg, in the wildest, bloodiest, Death Race ever. After a failed attack on inmate and legendary driver, Frankenstein, Black Ops specialist Connor Gibson (McGowan) infiltrates a super-maximum federal prison with one goal – enter the immoral and illegal Death Race and take Frankenstein down. Connor enlists the help of Baltimore Bob (Glover) and Lists (Koehler), and unexpectedly falls in love with bartending beauty, Jane (Marzano). Connor will have to fight for more than his life in this brutal world of no guards, no rules, no track, and no fear.

Strap yourself in for an insane thrill ride inside in the Death Race 4-Movie Collection featuring an all-star cast including Jason Statham, Danny Glover, Tyrese Gibson, Danny Trejo, Ving Rhames and Zach McGowan. Death Race is the brutal racing sport, where hardened criminals and smoking-hot navigators drive to survive or die trying. Packed with incredible stunts and brutal fight scenes, get ready for the non-stop barrage of high-octane thrills that will leave you pinned to your seat! The collection includes Death Race, Death Race 2, Death 3: Inferno, and Death Race: Beyond Anarchy.

SICARIO: DAY OF THE SOLDADO 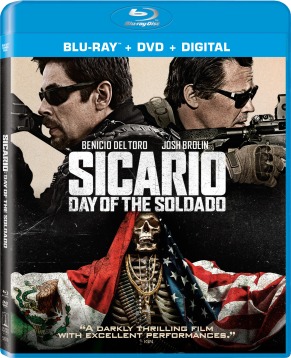 SICARIO: DAY OF THE SOLDADO Blu-ray, DVD, and Digital bonus features included three behind-the-scenes featurettes. Fans of the original Sicario can learn more about why this heart-pounding new chapter needed to be told in “From Film to Franchise: Continuing The Story” and can also take a deeper look into Sollima’s vision for the film, the intense action and real world connections in “An Act of War: Making Sicario: Day of the Soldado.” “The Assassin and the Soldier: The Cast and Characters” has Del Toro and Brolin leading the conversation about how their characters Matt and Alejandro have evolved in this film, and takes a look at the strong supporting cast.

Based on characters created by Sheridan, SICARIO: DAY OF THE SOLDADO was executive produced by Ellen H. Schwartz, Richard Middleton and Erica Lee. The film was produced by Basil Iwanyk, Edward L. McDonnell, Molly Smith, Thad Luckinbill and Trent Luckinbill.

SYNOPSIS: In SICARIO: DAY OF THE SOLDADO, the series begins a new chapter.  In the drug war, there are no rules – and as the cartels have begun trafficking terrorists across the US border, federal agent Matt Graver (Josh Brolin) calls on the mysterious Alejandro (Benicio Del Toro), whose family was murdered by a cartel kingpin, to escalate the war in nefarious ways. Alejandro kidnaps the kingpin’s daughter to inflame the conflict – but when the girl is seen as collateral damage, her fate will come between the two men as they question everything they are fighting for.

SICARIO: DAY OF THE SOLDADO has a run time of approximately 123 minutes and is rated R for strong violence, bloody images, and language.

Academy Award® and Oscar® are the registered trademarks and service marks of the Academy of Motion Picture Arts and Sciences.

This promotion will end Tuesday, October 9 at 10:00 AM (eastern time). Only one entry per person. No purchase necessary. U.S. residents are eligible to enter. Winners will be contacted via email. AccordingtoKristin.com and other promotional partners are not responsible for lost, stolen, or misdirected mail.

END_OF_DOCUMENT_TOKEN_TO_BE_REPLACED

They’re right to fear her.

SYNOPSIS: In DARK PHOENIX, the X-MEN face their most formidable and powerful foe: one of their own, Jean Grey. During a rescue mission in space, Jean is nearly killed when she is hit by a mysterious cosmic force. Once she returns home, this force not only makes her infinitely more powerful, but far more unstable. Wrestling with this entity inside her, Jean unleashes her powers in ways she can neither comprehend nor contain. With Jean spiraling out of control, and hurting the ones she loves most, she begins to unravel the very fabric that holds the X-Men together. Now, with this family falling apart, they must find a way to unite — not only to save Jean’s soul, but to save our very planet from aliens who wish to weaponize this force and rule the galaxy.

The red carpet premiere of “SHINE,” in theaters Oct. 5, is coming up quick.

On Oct. 2 the stars and filmmakers will walk the carpet along with special guests and Thisfunktional will be there.

Who would like to join Thisfunktional at the premiere to watch the movie?

Here’s more ways to enter:
To enter you must be subscribed to my YouTube channel: Thisfunktional and follow instagram.com/Thisfunktional and email me your full name and mailing address with the subject line #ThisfunktionalContest #SHINEPremiere to Thisfunktional@Gmail.com.
Disclaimer: Winners will be chosen randomly. Contest runs to October 8. 24, 2018 11:59 p.m. PST. No purchase necessary. Prize provided by Supersonix Media, inc..  Only open to the U.S., no PO Boxes or international addresses. Only one entry per household. Entries on behalf of another person will not be accepted and joint submissions are not allowed. We will not accept entries of contestants who have claimed a prize in the last 6 months.

“SHINE” is a NY-set Salsa dance movie which tells the story of two Puerto Rican brothers, Ralphi Matas (Jorge Burgos) and Junior (Gilbert Saldivar), from New York’s Spanish Harlem and the street’s best Salsa dancers, are separated after a tragedy only to reunite years later on opposing sides of gentrification.

After 7 years of absence from New York City, Ralphi is back to develop commercial real estate in his old neighborhood. However, upon his return, Ralphi encounters his estranged brother, Junior, who followedin his father’s footsteps, Ramon Matas (David Zayas), and is now an elite salsa dancer and an unwavering activist AGAINST gentrification in the neighborhood.

While having to face his past in order to succeed in the present, Ralphi must confront his boss Linda (Alysia Reiner) who is aggressively pursuing the lucrative development deal that brought him back to the city he was born, and thus is driving the wedge even further between him and his brother.

On the other side, when Josie (Kimberli Flores), the new owner of their father’s dance studio, reveals she is behind on the mortgage payments. Junior rallies the local dance community to raise funds against all odds to save the dance studio, DESPITE the gentrification efforts of his brother.

While the brothers have chosen opposite paths thus far, they are brought back together when Tio Julio (Nelson Gonzales) reminds them of the power of family and the importance of their community.

SHINE is a Forgiven Films movie, a division of GVN Releasing. Produced by 13 Paces in association with The Exchange, Sugar Studios LA, and Varona Productions.