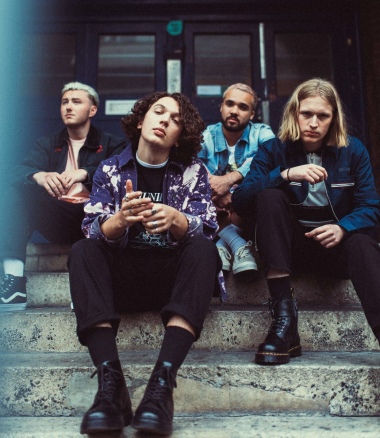 Larkins have released the dreamy new song ‘Wallflower’ as the B-side to their latest single ‘Sugar Sweet’ out now via Good Soldier Records.

‘Wallflower’ plays as if George Fitzgerald laid down production touches for Foals, with airy electronics and hazy samples paired with indie guitars and alluring hushed vocals.

Regarding the song frontman Josh Noble says, “I had the beginnings of ‘Wallflower’ sat on my laptop for what seems like forever. It has a Tame Impala meets Bon Iver vibe which I love. After working with Dom on some cool guitar additions, and a friend/musician we know called Sam Manville (FTSE) on the structure, it finally came together. Then as always it was just a case of sitting with the beast Chris Zane and nailing the sounds. I loved our time in the studio making this one.”

‘Wallflower’ is the B-side to Larkins’ latest single ‘Sugar Sweet’, a bright love song featuring exquisite harmonies, soaring synths and a massive inescapable chorus. It was released earlier this month, premiering as Zane Lowe’s ‘World First’ on Beats 1. It’s since gone on to gain great support from the likes of BBC Introducing and The Independent, while also clocking up over half a million streams.

‘Sugar Sweet’ follows the release of Larkins’ debut single ‘TV Dream’ on Good Solider Records earlier this year. The song received an immense response from both fans and media, quickly clocking up over a million streams. ‘TV Dream’ proved a radio hit and featured on the playlists of Radio 1, BBC Introducing and Radio X, while the band again received significant support from Zane Lowe on Beats 1.

The release led the band to sell out a landmark hometown show to 2000 rapturous fans at Manchester’s Albert Hall. Capturing the moment perfectly, Larkins release the live album Larkins: Live At The Albert Hall, Manchester. It is available to stream now and can be purchased physically from July 5th on CD, cassette and vinyl.

As an undeniable proven live force, Larkins have sold out headline shows across the UK and Europe. They played their first US shows this year at SXSW Festival, while this month they played their largest London show yet to an ecstatic sold out crowd at Dingwalls.

This autumn the band will embark on an extensive 16-date UK headline tour, running throughout October and November. Tickets for all shows are available now via larkinsband.com

This year has seen Larkins make a huge statement as one of the most exciting and in-demand bands to emerge from Manchester in recent times. The band are currently recording their debut album with producers Dan Nigro (A-Trak, Sky Ferreira, Lewis Capaldi) and Andrew Dawson (Kanye West, Fun, Kid Cudi) – a record which is sure to send Larkins even further into the stratosphere.

“Trust us – Manchester guitar-pop collective Larkins are fast on their way to becoming your next favourite band.”
Music Crowns