I’m a bit late in getting this review posted, but we had a week of preparing for Hurricane Dorian, who decided at the last minute to avoid Miami completely. (Side Note: My thoughts are with everyone in the Bahamas, or those with family in the Bahamas.)

Now shhhhhhh . . . don’t tell anyone that I willingly went to the Backstreet Boys concert here in Sunrise, Florida! As an *NSYNC lover, I felt like a traitor the entire time, but I hate to admit . . . it was a great show!

The besties wanted to wear matching shirts with BSB lyrics on them, but I opted for a general boy band shirt instead haha. Mine said, “All I want is a 90s boy band kinda love.” I had to maintain some sort of loyalty! I was flanked by my two die-hard BSB-loving best friends and I wouldn’t have had it any other way. In all seriousness, I’ve always enjoyed BSB’s music. Especially now because it brings you back to a time when our only responsibility was turning in homework on time. The nostalgia is real and the music is still classic.

Brian’s son, Baylee Littrell opened for the guys and you could tell he was a natural. His music is a sort of cross between country and rock, but it still had a young vibe to it. He really knew how to keep the crowd engaged, which is difficult to do sometimes as an opening act. I’m sure people will be hearing more from him in the future!

The guys came out at about 9 pm and played non-stop for about 2 hours. Believe it or not, they managed to squeeze 33 songs onto the set list! Granted, some songs were little snippets and solo distractions while the rest of the guys handled their quick changes lol, but everything worked really well. It was non-stop energy the entire time. I was a bit surprised at the lack of pyro on stage, but the set up was low key and allowed the guys to shine and connect with the people who have supported them for so long. It was actually really nice. There’s also a HUGE HD screen above the stage, giving fans a great view no matter where their seats were.

At one point, the guys came out and sang an a cappella version of “Breathe” off of their latest DNA album. When I tell you, these guys sounded incredible! They definitely still got it! The vocals and dancing throughout the entire show were really impressive.

Here’s a look at the set list for our show:

Everyone Show Intro
Everyone (Remix, First verse only)
I Wanna Be With You
The Call
Don’t Want You Back
Nobody Else (Brian solo; Chorus only)
New Love
Get Down (You’re the One for Me)
Chateau (Howie solo; First verse and chorus only)
Show Me The Meaning of Being Lonely
Incomplete
Undone
More Than That
The Way It Was (Nick solos; First verse and chorus only)
Chances
Shape of My Heart (No second verse)
Drowning (No second verse)
Passionate (Starts with Kevin and AJ solo)
Quit Playing Games (With My Heart)
As Long As You Love Me
No Place
Breathe (a cappella – on elevated platform)
Don’t Wanna Lose You Now (On elevated platform)
I’ll Never Break Your Heart (On elevated platform)
All I Have to Give (Conversation Mix)
All I Have to Give
Backstreet Boys DNA Tour Remix
Everybody (Backstreet’s Back) – (Remix)
We’ve Got It Goin’ On (No second chorus or bridge)
It’s Gotta Be You (No second chorus, bridge or ending)
That’s the Way I Like It (No second chorus or bridge)
Get Another Boyfriend (No bridge)
The One
I Want It That Way

I’m so glad I was able to make it out to this show with the girls. You all know how much I love a great concert, and this was no exception. BSB still knows how to put on a great show! I hope, if you’re reading this, you realize the sarcasm about me feeling like a traitor haha. It’s okay to like BOTH bands, people! Now if we could only get the guys to talk to their friends over in *NSYNC about putting together a joint tour, all would be right in the world. Can you imagine???? A BSB/NSYNC (with ALL members) tour??? They’d have to play two shows in every city!

If you’re still thinking about buying yourself a ticket to the DNA World Tour, please exit out of this page and do it!! You won’t regret it! Your wallet might, but you won’t!

Suit up and check out this new clip from Ad Astra, starring Brad Pitt. Get tickets now to see it In theaters September 20.

20th Century Fox has released a special preview of the intense, action-filled “Moon Rover” sequence from AD ASTRA, coming to theaters on September 20, 2019.

Starring Brad Pitt, AD ASTRA is a paranoid thriller in space that follows Roy McBride (Pitt) on a mission across an unforgiving solar system to uncover the truth about his missing father and his doomed expedition that now, 30 years later, threatens the universe.

Director James Gray (THE LOST CITY OF Z, THE IMMIGRANT) and director of photography Hoyte van Hoytema (INTERSTELLAR, DUNKIRK) researched actual images of the Moon from the Apollo lunar missions to ensure an authentic look that will surely be breathtaking on the big screen. 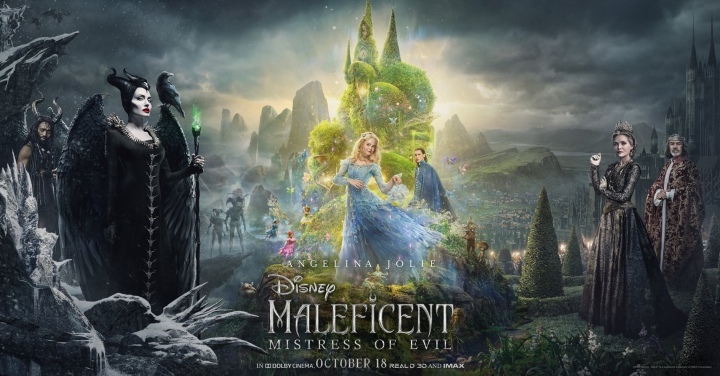 A new special look at Disney’s “Maleficent: Mistress of Evil” is now available. Watch as Angelina Jolie, Elle Fanning, Michelle Pfeiffer and other members of the cast reflect on the legacy of the iconic villain and the brand-new chapter in her story.

The years have been kind to Maleficent and Aurora. Their relationship, born of heartbreak, revenge and ultimately love, has flourished. Yet the hatred between man and the fairies still exists. Aurora’s impending marriage to Prince Phillip is cause for celebration in the kingdom of Ulstead and the neighboring Moors, as the wedding serves to unite the two worlds. When an unexpected encounter introduces a powerful new alliance, Maleficent and Aurora are pulled apart to opposing sides in a Great War, testing their loyalties and causing them to question whether they can truly be family. “Maleficent: Mistress of Evil” is directed by Joachim Rønning from a story by Linda Woolverton and a screenplay by Linda Woolverton and Noah Harpster & Micah Fitzerman-Blue. The film is produced by Joe Roth, Angelina Jolie and Duncan Henderson with Matt Smith, Jeff Kirschenbaum, Michael Vieira and Linda Woolverton serving as executive producers.