What will you be watching? Are there any you’d like me to recap via podcast or short blog reviews? Let me know!

Ladies and gentlemen, I know it seems like we only just started watching Season 26 of Dancing With the Stars, but we’re already at the finals! I have to admit, I do not like the shortened season. I’m extra salty that they included Adam Rippon on the short season because we all need a little Adam sass in our lives . . . 4 weeks is just not enough.

Now, yes, I might be a bit biased because I’m Team Adam all the way, BUT I can be objective for the purpose of this post. I was shocked after last night’s elimination because I was certain that it would come down to Adam and Mirai Nagasu in the end. Yes, Josh Norman and Chris Mazdzer were fan favorites, but Adam and Mirai just have that wow factor. Not because they’re skaters, but because of the graceful way they express their movements. If you need a reminder of Mirai’s graceful Foxtrot, here ya go:

She was fantastic, and I definitely think her and Alan deserved a spot in the finals alongside Adam & Jenna and Josh and Sharna. Not to hate on Tonya Harding or anything, but she just wasn’t as good, technically, as the others. But also, like, she plead guilty to the whole Nancy Kerrigan situation, sooooo . . . I don’t want her hurting anyone else for that mirrorball trophy. I do think a lot of time has passed since the incident, but putting her in another competitive situation just doesn’t sit right. #justsaying  Oh, and before I get pounced on for saying that, I do think she’s done a great job on the show. I just don’t think she’s as good as Mirai and Alan have been.

With that being said, and with my bias showing, Adam is my favorite to win. If you know anything about him, you know that he is definitely not a dancer. He’s a skater, yes, but they glide, they don’t dance. His dances with Jenna have been spot-on for the past 3 weeks and I think it has a lot to do with the chemistry they’ve had from the beginning. They have something with each other that I don’t remember seeing with other partners. Sure, there was the brother/sister relationship between Val and Zendaya, and Val and Laurie, but never quite like Adam and Jenna.

What do ya’ll think? Is Adam your favorite or are you rooting for Josh/Sharna or Tonya/Sasha? Let me know! How did you feel when Mirai/Alan, Chris/Whitney and Jennie/Keo were eliminated? Did they make the right call? Talk to me!

And while you ponder those questions, refresh your memory from the past 3 weeks and watch Adam and Jenna SLAY their dances:

As an added bonus, check out the dance battle between Adam/Jenna and Mirai/Alan, where Adam and Jenna jump into what he calls “drag queen splits.” Yes, they did that:

Also, let’s not forget that I recently met Adam when I took myself and my family to see Stars On Ice here in Ft. Lauderdale for my birthday last month. He’s a beautiful human being and deserves all of the attention he’s been getting. Not because he’s an out and proud gay man, but because he’s showing people how important it is to be yourself. Even with his crazy schedule, he manages to meet fans at the shows with grace and humility. So, I’m not saying you should vote for #TeamJustFriends, but I kind of am. (DO IT!) 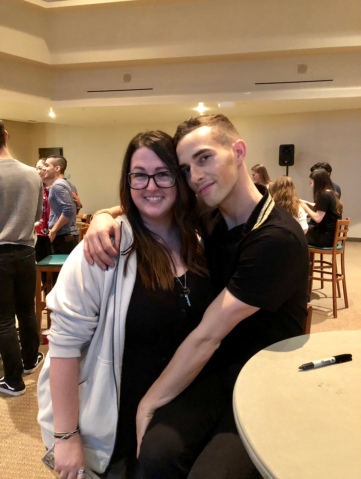 Tune in to ABC on Monday to watch Adam Rippon, Josh Norman and Tonya Harding face off in the finale for the coveted mirrorball trophy!

Today is all about TV here on According to Kristin. What I’m watching, what I’ve been wanting to watch, what others are watching that I haven’t gotten into, etc.  As always, I’m open to any suggestions for shows you want me to check out. Even if you just want to rant or rave about a recent episode of a show…tweet me all about it @thisiskristin_!

I admit…I watch a lot of TV. I started doing podcast reviews with some of my friends, which has kept me in front of the TV instead of in the gym lol. BUT, I plan on watching the shows while I’m at least running on the treadmill every night. 😜

One of my absolute favorites at the moment is This Is Us. Even just the trailer for the NBC show had me hooked! This is the first time in my life that I’ve witnessed a show that touches on every possible situation and curve ball that life can throw your way. And to do it with such an incredible cast is the icing on the cake. Milo Ventimiglia, Mandy Moore, Sterling K. Brown, Justin Hartley, Chrissy Metz, Susan Kelechi Watson and everyone else involved with this show deserve all the praise in the world. I don’t want to give away any spoilers, but if you haven’t seen an episode of this show, you should definitely change that asap.

A show I recently binge-watched was Shadowhunters, which can be found on Freeform (formerly ABC Family). A friend from work recommended it to me, so I binged it on Hulu and loved it. The acting is suspect at times, but the premise for the show is interesting. I saw the Mortal Instruments film a few years ago and this is based on the same concept and the same novel by Cassandra Clare. The show stars Katherine McNamara, Dominic Sherwood, Matthew Daddario, Emeraude Toubia, Harry Shum, Jr., Alberto Rosende and Isaiah Mustafa (the Old Spice guy!!). The special effects are pretty decent and the soundtrack is amazing. I’ll be talking about the artist, Ruelle (who sings the title track for the show and also has a few other songs that are featured), A LOT, so check her out wherever you download or stream music. 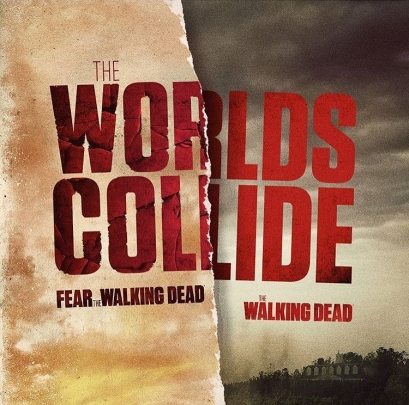 Last night Danay Garcia posted a photo on her Instagram that sent Fear the Walking Dead and The Walking Dead fans spiraling down the rabbit hole! We’ve been speculating whether or not they would merge the two shows at some point and we’ve been shot down at every conspiracy theory, BUT it is finally confirmed that this will happen!! Not sure when, why, or how, but it’s going to happen at some point and I’m excited for it!

Don’t forget to catch The Walking Dead is back on AMC October 22nd!

One of my guilty pleasure shows is Dancing With the Stars. I know, I know…don’t judge me! I wasn’t really interested in this season except for seeing Jordan Fisher and Lindsey Stirling though. I spoke about Jordan Fisher yesterday for #MusicMonday, but watching him dance is a whole other ballgame. He performed a Contemporary dance last night with his partner Lindsay Arnold that was absolutely beautiful! He can literally do anything! You can watch their dance below:

Lindsey Stirling is an incredible violinist, but she’s also proving herself on the dance floor. She’s used to jumping around on stage when she’s playing the violin, but she’s a self-proclaimed clumso too. It doesn’t show though! I probably would’ve been tripping over my own two feet if I attempted even five seconds of this dance lol!

Check out her Jive with Mark Ballas from last week’s episode below:

Let me know what you’re watching! Tell me about a recent episode that made you cry and reevaluate life. There are so many shows out right now, it’s hard to keep up!

See you all next week for #TVTuesday!

Keisha and I got together to talk about a variety of things this week!  From Johnny Depp and the domestic violence claim against him, Mark Salling and the child pornography charges against him, first-time bikini waxes, LA and Nyle DiMarco winning the mirror ball trophy on Season 22 of Dancing with the Stars!

Disclaimer: Despite our late night rant, neither Keisha or I support domestic violence in ANY way and we DEFINITELY do not condone ANY sort of child pornography no matter who you are!  These are both despicable acts that should not go unpunished (so long as the person is rightfully convicted).  It is always important to know the facts.

So…check out our first Real Talk podcast below and let us know what you thought!  If you have any suggestions for topics you’d like for us to discuss, feel free to leave us a comment!  Thank you for the support!