Eugenio Derbez and Selma Hayek take the lead in “How to be a Latin Lover,” a Lionsgate movie out April 28.

The movie tells the story of a male gold-digger Maximo, played by Derbez, who loses it all when his elderly wife throws him out for a younger man, pleated by Michael Cera.

The hilarious Derbez is over the top with his portrayal, which works because of the antics he has to go through.

Cera is funny and plays off Derbez well. The two are a good fit to be rivals.

Maximo moves in with his sister Sara, played by Selma Hayek, and her son Hugo, played by Raphael Alejandro, who he hasn’t seen for years.

Hayek is great with a serious and funny role. Her ability to switch her emotions throughout the story in a genuine manner comes off fantastic. It’s a beautiful role for her and she is great.

Alejandro is the key for this movie. His role keeps the movie moving forward. His tenderness gets the audience connected to the story.

The story has some very funny moments which the audience can’t help but laugh at.

The pacing of the movie is slow, but still moves forward with each scene.

Derbez said he is happy that an American studio, Lionsgate, took a chance on a movie where the two leads are Latino.

Although Derbez has had a few successful movies in the U.S. market, latinos have still struggled to get studios to take them serious as leading roles.

Derbez said he was shocked at getting a high rating during test screenings. He wasn’t sure how his style of comedy would mesh with the American writers’ style.

The comedy can be appreciated by people of different age groups and of any ethnicity as the story could be about any man in the same situation as Maximo.

Filming in LA was another challenge for the movie, but thanks to the California Rebate, which “How to be a Latin Lover” was the first movie by Lionsgate to receive it, the movie was able to have Hayek and shoot in LA and was able to go after the actors that were in this movie.

The chemistry between Derbez and Hayek jumps off the screen. The two seemed natural together.

Hayek said she was happy to be on set with Derbez because they connected so well. She loves to improvise and Derbez was able to go along with it and make it seamless. 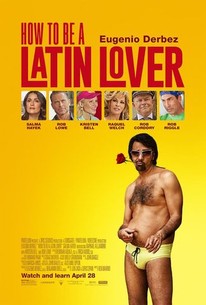