You Could Have Saved Her I Gave You All The Clues

The Snowman, a terrifying thriller based on the novel by Jo Nesbø is now in theaters!

SYNOPSIS: When an elite crime squad’s lead detective, Harry Hole (Fassbender) investigates the disappearance of a victim on the first snow of winter, he fears an elusive serial killer may be active again. With the help of a brilliant recruit (Ferguson), the cop must connect decades-old cold cases to the brutal new one if he hopes to outwit this unthinkable evil before the next snowfall.

To celebrate the release of this terrifying thriller starring Michael Fassbender (X-Men series) and Rebecca Ferguson (Mission: Impossible-Rogue Nation) we have an exclusive The Snowman  giveaway for you! 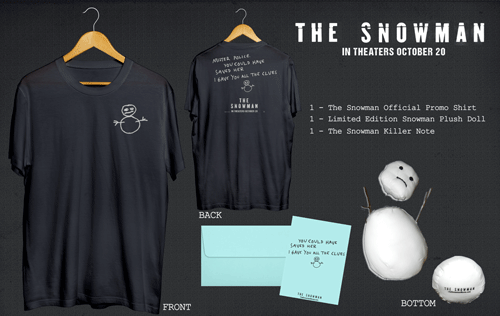 The Snowman pack has:

1 – Limited Edition Snowman Plush Doll: This limited edition Snowman plush is only available via this promotion and has a run of 200 pieces worldwide. It is a replica of the killer’s Snowman and features a detachable head and the Snowman logo on the bottom.

1 – The Snowman Official Promo Shirt – An official promo T-Shirt featuring The Snowman logo on the front and the signature design on the back.

Here’s what you have to do to enter the giveaway…

Hint: The more places you follow, the better your chances at winning!  😉

This promotion will end October 31 at 10:00 AM (eastern time). Only one entry per person. No purchase necessary. U.S. & Canadian residents are eligible to enter. Winners will be contacted via email. AccordingtoKristin.com and other promotional partners are not responsible for lost, stolen, or misdirected mail.