I’ve been to a lot of live shows in the past two months or so, but it’s still not enough! This time, my niece and I got to see Sam Smith’s ‘The Thrill of It All Tour’ at the American Airlines Arena in Downtown Miami on July 14th. Sadly, our seats were in the nosebleeds, but it didn’t even take away from the incredible show that he put on for everyone.

The show started promptly at 8pm with his opening act for the night, Cam. Cam is a country singer who I’d never heard of before, but she has a great voice. She was interacting with the crowd throughout her set and really tried to get people to see a personal side to her. This isn’t an easy task when you know the crowd is there to see someone else. With that being said, I felt like she held her own up there! I would definitely check out her music HERE.

Sam’s set began at about 9pm and lasted almost 2 hours. I’m not sure if it’s because of where we were sitting, but the sound for this show was absolutely fantastic. Sometimes at live shows, you can’t hear what the artist is saying because of the acoustics in the venue and where your seats are. This one, however, sounded great. Here’s what the setlist for our show looked like:

At one point, Sam addressed the sadness in his songs by joking, “I was sitting in my home and realized how fucking depressing my music is.” He wanted to make it a point not to have us leave the room “feeling like shit” afterward and I think he succeeded.

One of my favorite moments of the night was during “I’m Not the Only One” when he put his mic down and had the entire crowd singing his words back to him. It was so loud and beautiful. Those are always my favorite moments during a live show, but this one seemed particularly moving.

There was also a fantastic moment at the end of “HIM” where the lights went out and a light bar on stage lit up in rainbow colors.

One thing that I found particularly funny was right before the encore performances. The amount of people that were walking out was puzzling. I had to ask my niece if they were new to the art that is a live show. You don’t leave until the lights come up, people!

Here are some pics I took from the show (again, I apologize for the distance lol): 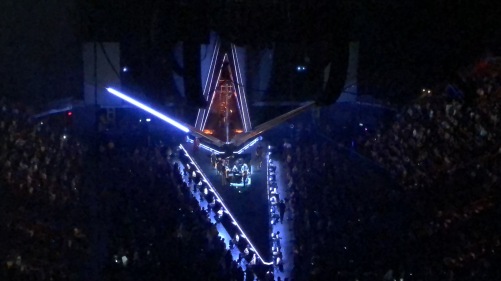 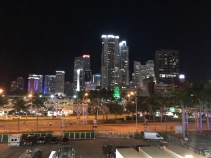 To be quite honest, despite the distance of our seats from the stage, this was one of my top 3 shows I’ve ever been to (and I’ve been to A LOT). Everything about it was worth the mission getting to the AAA. If you have a chance to catch the show, I highly recommend it. You can even get the “cheap” seats and still have a great time!

Get out there and support a musician who wears his heart on his sleeve and is unapologetically proud to be who he is — a musician with true talent and a voice we all love.