An Action-Packed Retelling of the Classic Legend. 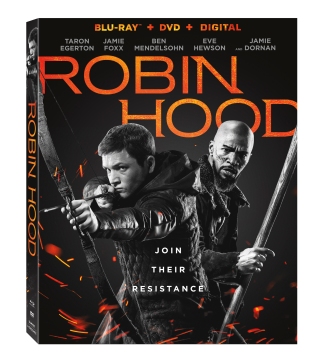 SYNOPSIS: Returning home from the Crusades, Robin of Loxley (Egerton) finds his country oppressed by the evil Sheriff of Nottingham (Mendelsohn). With the help of Moorish warrior Little John (Foxx), Robin transforms into the heroic outlaw Robin Hood, taking up arms to fight the sheriff and win the heart of his love, Maid Marian (Hewson).

The Robin Hood special features include an in-depth, never-before-seen, 7-part documentary; multiple outtakes; and deleted scenes, all of which show what it took to put a new spin on everyone’s favorite hooded hero. Experience four times the resolution of full HD with the 4K Ultra HD Combo Pack, which includes Dolby Vision® HDR, bringing entertainment to life through ultravivid picture quality. When compared to a standard picture, Dolby Vision can deliver spectacular colors never before seen on-screen, highlights that are up to 40 times brighter, and blacks that are 10 times darker. The 4K Ultra HD Combo Pack also features new HDR10+ technology, making for an enhanced viewing experience on next generation displays by using dynamic tone mapping to reflect frame by frame variations in brightness, color, saturation, and contrast. Additionally, the 4K Ultra HD Combo Pack and Blu-ray feature Dolby Atmos® audio mixed specifically for the home, to place and move audio anywhere in the room, including overhead. The Robin Hood 4K Ultra HD Combo Pack, Blu-ray Combo Pack, and DVD will be available for the suggested retail price of $42.99, $39.99, and $29.95, respectively.

This promotion will end Tuesday, February 26th at 12:00 PM (eastern time). Only one entry per person. No purchase necessary. U.S. residents are eligible to enter. Winners will be contacted via email. AccordingtoKristin.com and other promotional partners are not responsible for lost, stolen, or misdirected mail.