Here’s a bit of backstory . . . my oldest brother has always been a fan of Motley Crue, and that was passed down to me at an early age. I’d gotten laid off in 2008 and he offered me his ticket to FanFest even though it would’ve been his first time seeing them live. To repay him, I took him to see Motley Crue twice in the past four years before they put an end to touring. There’s a bond that music can form between two completely different people and that has always been appreciated. 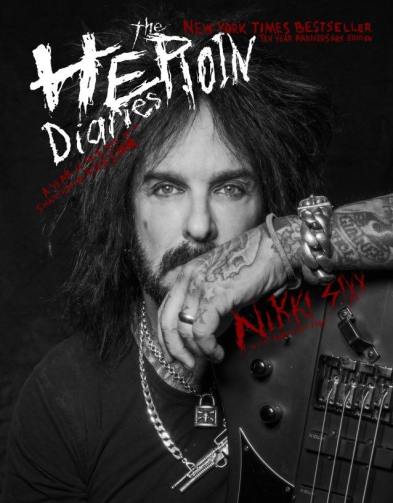 When The Heroin Diaries was released in 2007, it quickly became one of my favorites. I even shared the book with some of my friends who wouldn’t have necessarily thought to pick it up at the bookstore. After reading my copy, they actually did go out and buy it for themselves. Personally, I’ve never done any sort of drug, but reading about his struggle with addiction and the struggle to regain control of his life was heart wrenching and I couldn’t put the book down. To know that someone struggled that bad and has now been sober for so many years is incredible. You will definitely find yourself wondering how he survived this time in his life, but that’s what makes his whole life story so interesting. I also think of this book as a sort of cautionary tale to anyone considering taking any drugs.

If you haven’t read this biography, here is the unofficial synopsis:

The book is a 413-page collection of diary entries written between Christmas of 1986 and Christmas of 1987. In considerable detail, the diaries chronicle the recording of Mötley Crüe’s Girls, Girls, Girls album and the subsequent Girls Girls Girls tour, ending with Sixx’s near-death from a heroin overdose in late 1987, which inspires the band to quit heroin altogether.

With the 10th Anniversary of the release approaching, Sixx is partnering with PledgeMusic to release special editions of the book, which include 2 brand new chapters, as well as deluxe editions, a graphic novel, signed copies of certain items, CD and Vinyl versions of the soundtrack by Sixx: A.M. (which is also FANTASTIC) and more. You can check out the link below to pre-order your merch:

If you’ve read The Heroin Diaries already, let me know what you thought! If not, what are you waiting for?? Grab yourself a copy and you can thank me later!

You can find Nikki Sixx on the following social media platforms: