The title “Bad Samaritan” embodies the essence of this story and captures the contrasting nature of the main characters.

The two characters couldn’t be more polar opposites even when they have so much in common with their willingness to go to moral gray areas to survive.

During a press conference for “Bad Samaritan” Tennant talked about researching serial killers to get into the right mindset for the role.

Writer Brandon Boyce said that the audience can appreciate that not everything is explained and can be creeped out by the story they make up from the bits and pieces of information that are given.

As much as the script was well written, director Dean Devlin said that having both Sheehan and Tennant as the lead actors made these characters really come to life, as well as capturing the rural setting.

The thrill of the cat and mouse game which turns and at points can make the audience confused as to who is being hunted and who is the hunter.

The entire story, the cast and the filmmakers come together fantastically to create a thrilling, thought provoking story which intensified dramatically from beginning to end. 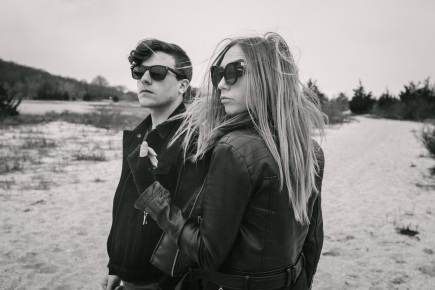 After an eventful 2017 for alternative rock outfit VISTA, the band has announced their first tour of 2018, “The Bloodlust Tour”. The month-long run consists of 25 dates, spanning across the US Northeast, Midwest, and South. “The Bloodlust Tour” will also feature Florida rockers Brightside as direct regional support for 8 southern dates, from 7/9 – 7/17. The band has teased that there will be new music played, an all-new set, new merch items, and a “Long Live” one year anniversary show in their hometown (Long Island, 7/19). Limited VIP packages will be made available in select cities via individual ticket link, which will be announced in the coming weeks. Since the completion of their last tour, “The Oasis Tour” in November 2017, VISTA has been in the studio with ZK Productions (Mayday Parade, Set It Off, Chapel) working on new material, although no official release timeline for new music has been announced.

An electronically-tinged alternative rock band, NY-based outfit VISTA originally formed in late 2015. Comprised of lead vocalist Hope Vista and guitarist Greg Almeida, the band combines both modern alternative rock and electronic influences to create their unique anthemic sound. VISTA released their debut 4-track EP “VERSUS” shortly after their original inception, in which their debut single “On The Brink” debuted worldwide on idobi radio. Their name hasn’t been shy in the press, since; the band has garnered praise from outlets such as Alternative Press, Rock Sound, Substream, and AXS.  In 2017, VISTA released their highly anticipated sophomore EP “Long Live,” featuring the lead single “Allegiance, played at Irving Plaza, gained idobi rotation with their single “Henchmen”, and completed  two headlining tours “Long Live” immediately made its’ way onto three different iTunes Alternative charts, including peaking at #10 on the top selling $5.99 albums, and sparked the completion of two promotional tours, in August and November, respectively. “The Bloodlust Tour” kicks off on June 25th in New Hampshire. Tickets are available via their website or Bandsintown. 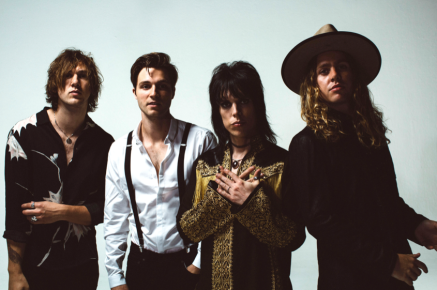 PLAYING FOUR SOLD OUT HEADLINE SHOWS
AT THE ROXY, LOS ANGELES IN MAY

WATCH THE VIDEO FOR ‘ONE NIGHT ONLY’ HERE

Having sold-out their forthcoming four-night residency at the legendary Sunset Strip venue The Roxy in L.A. at the end of May in just a matter of hours, British rockers The Struts have now announced two shows in London and Manchester this June, alongside their long-awaited return to Download Festival.

The explosive four-piece last played in the UK in September 2017, to a packed-out Electric Ballroom in London, with rave reviews from the likes of Kerrang who described the gig as “a real turning point in the glistening rockers’ career”, and the Daily Star who claimed that “singer Luke Spiller certainly does have moves like Jagger, and gives him a run for his money in the costume change stakes too.”

And now – following their main stage slot at Download Festival on June 9th supporting Guns N’ Roses, who they have played many shows with around the world previously – they will play London’s KOKO on June 19th and Manchester’s Gorilla on June 20th.

Frontman Luke Spiller said of the upcoming shows, “Can’t wait to be playing in our native country to give our fans what they deserve. The best show they will see all year. This one’s for you. See you there x.”

Tickets for the headline shows go on sale on Friday 20th April at 9am via livenation.co.uk/artist/the-struts-tickets with The O2 pre-sale starting on Weds 18th April and Live Nation pre-sale on Thurs 19th April via the usual channels.

The Struts head off on their second run of dates with Foo Fighters in the US on the band’s Concrete And Gold tour this week and running throughout April, before they start their own headline tour of the US culminating in their four sold out shows at The Roxy in L.A. They then head to Europe for high-profile festival appearances in France, Norway, Belgium and Austria alongside their UK performances.   The band’s highly anticipated second album will be announced soon. 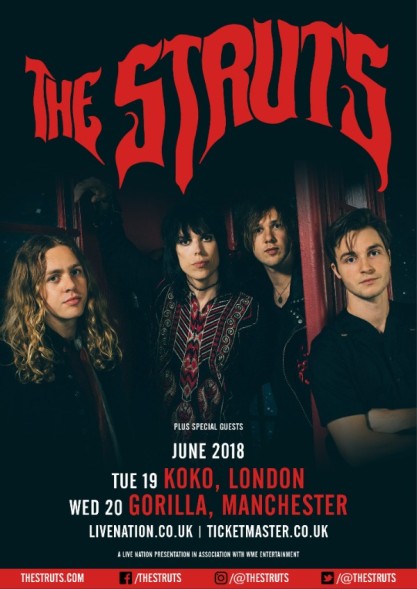 Singer/Songwriter Nahko has released the official music video for ‘Hamakua’. The single is the third from his debut solo album, My Name Is Bear, following the release of ‘Dragonfly’ and ‘Be Here Now’, and is the title track from his upcoming acoustic EP.

The video features never-before-seen home videos of Nahko from when he first began performing and originally wrote the song at age 18.

Nahko said of the video, “Finally, to Hamakua. The breath of the Creator. The birthing place of so many of the popular Medicine for the People songs. The Hamakua coast rolls along the rocky east side of the Big Island of Hawai’i, a place where I lived for nearly a decade; a place that served as the foundation for my awakening.

I teamed up with filmmaker Dom Walczuk again, the same director who made a number of our first music videos and documentaries on the Big Island, which now have millions of views, and we schemed to tell a reminiscent story of a bear, an island, and a community that grew a young cub and his music. We collected shots that Dom had in the vault from years back and patch worked them with VHS footage I had taken as a teenager of my first open mics and piano recitals. Then we laid foundation shots of who I am now on island, on horseback, in the ocean, to create a juxtaposition of ‘then and now’.

The result is a collage of time well spent and I’m proud to present this visual storyboard that nods to the magic found on the ‘piko’ of the Pacific and within the sounds of my personal journey as a young man. ‘Oi kau ka Iā, e hana i ola honua – while the earth still moves, do all you can. Eo!”

Nahko embarked on his solo acoustic tour last month, with support from Trevor Hall. A hugely accomplished pianist and guitarist, the shows brought a different interpretation to both his new solo work and his catalogue with Medicine For The People. Starting on April 18th in Dublin, the tour included six UK shows, including a sold out date at London’s Omeara on the 23rd.

Over the last five years, Nahko And Medicine For The People have continued to gather dedicated members of their global tribe of likeminded fans as they spread their powerful musical message. They incorporate a variety of sounds, ranging from alternative roots to acoustic rock while promoting social change. Their album HOKA debuted at #10 on Billboard’s Rock Album Chart and #6 on the Alternative Album Chart.

Nahko’s solo album, My Name Is Bear, debuted on a number of Billboard charts on its release in October last year including Independent Albums (#11), Tastemakers (#14), Emerging Artists (#19), Top Album Sales (#43), and the Top 200 Albums. The album also premiered at #1 on iTunes and the headline tour in support of it boasted multiple sold-out dates both Stateside and in Europe.

My Name Is Bear is a 16-track collection that reflects the soul, authenticity and spirit that Nahko’s fans have come to know. It predates Nahko’s rise to iconic status among diehard fans of Medicine For The People. As he puts it, the album serves as a “prequel,” that artfully merges rustic acoustic guitars, upbeat energy, tribal flavors, fiery percussion, and ponderous lyrics.

At the end of the day, My Name Is Bear sets the stage for a whole lot more from Nahko. 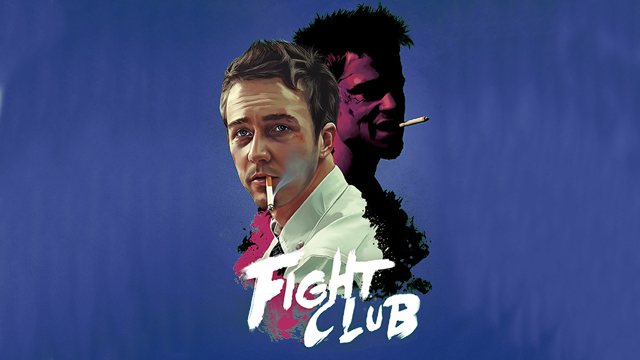 The Dust Brothers and Jacob Maymudes present a one of a kind, out of this world evening at the historic Wiltern theater, featuring the live musical score and acclaimed “Fight Club” by David Fincher.

A rare live appearance of The Dust Brothers along with multi-instrumentalist Angel Roche (Dave Navarro and Ziggy Marley), Eric Klerks on guitar and bass (Grandmothers Of Invention), Damon Ramirez on the synths (Fungo Mungo, Looner), and the talented film composer, Zoë Poledouris-Roche (composer: Conan The Barbarian, Bully).The show features eye-popping stunts and acrobatic action onstage by fight coordinator Henry Layton.
Come don your project mayhem rebellious side, and join in on this sensory overloaded revival night of “Fight Club,” the American cult classic.WHAT: Screening of the movie Fight Club by David Fincher with a live score and stunt performance

LOGE – $49.50 (inclusive of access to VIP preferential line, and reserved seating within LOGE),