Ladies and gentleman, I got to experience something incredible this past weekend. I ended up with front row tickets to The Man of the Woods Tour and it was something I will truly never forget. At one point, the first time JT stood in front of us, I felt a sharp pain in my chest and was convinced I was about to have a heart attack. Luckily, it passed and only got better from there! But, first, let me tell you how I got there:

I (finally) got my Bachelor’s Degree last August and, as a graduation gift, my aunts surprised me with tickets to see my Day 1, Justin Timberlake, on one of his stops here in South Florida. I’d been pretty bummed because the tickets were rather expensive and I was convinced that I wouldn’t be able to make it to one of his shows for the first time ever. So, when my aunts surprised me with FLOOR tickets, I was stoked! This would be the first time I’ve ever had floor tickets and it was for Justin freaking Timberlake. The only issue was having to wait months for the show!

Nevertheless, May 19th finally arrived and my niece & I were getting ready to head out to the show. South Florida has had an extremely rainy past few weeks, so I was iffy about heading out early and waiting in line for doors to open while getting soaked in the rain. Doors were supposed to open at 6pm and the show was scheduled to start at 7:30pm. We got there at 4:45 and there were about 35-40 people ahead of us in the GA Floor line. Luckily, Verizon members who are enrolled in the Verizon Up Rewards program are able to enter the venues via “fast lane,” so my niece and I ended up being second in line. We got in and raced to find a good spot in the front.

DJ Freestyle Steve began playing music, and then JT’s opening act, The Shadowboxers, made their way on-stage. They played about 3-4 songs and had great energy. The Shadowboxers was founded by Adam Hoffman, Matt Lipkins and Scott Tyler and is based out of Atlanta, GA. They later added Cole McSween on drums and Carlos Enamorado on bass. After a tweet from their Twitter account in 2013, telling JT to check out their cover of his song “Pusher Love Girl,” their relationship with him took flight. Their EP titled Apollo was released on March 23, 2018 and now they’re touring with him on The Man of the Woods Tour. 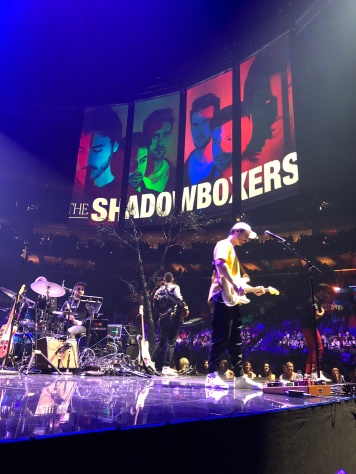 Justin’s set began a little after 9pm and the BB&T Center was living. As close as my niece & I were to the back stage, we were unable to see the main stage, so keep that in mind for future shows. Although I’m sure the fans up front were unable to see the stage we were at also.  The show was absolutely incredible. I’ve been to a lot of concerts at the BB&T Center and I’ve never been to one that looked completely sold out. Even the seats behind the stage were sold out. Luckily, with JT’s current stage set-up, everyone in the audience gets a little time with him. Even the crowd behind the stage got some time with him when he went out on a little riser behind his band, The Tennessee Kids.

The lights, the lasers, the little campfire sequence, the dancing, the sound, the vibe, everything was spot-on. Here is the set-list if you’d like to brush up on your lyrics: 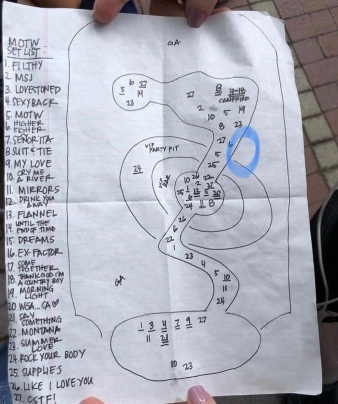 Another fan had sent me this photo that lists the set list along with where each song is performed. I found this to be very accurate aside from No. 24 being performed on the opposite side listed on the map. The blue circle represents where I was for the show.

Songs 13-18 were sung around a campfire that rose from beneath the stage and some of those songs were performed by the backup singers, individually, with an assist from JT.

“Cry Me A River” was performed on all three stages and walkways that were covered with smoke.

Also, keep in mind that at times throughout the show, panels would lower and double as screens for those who might be unable to see clearly. I’m not certain because I was beneath them, but they seemed like they might obstruct the view of the actual stages a bit when they’re down. Either way, they provide cool visuals that fit the theme of the album.

“Rock Your Body” was performed off to the side (the side I was on) in the VIP section. This was done on a light-up disco floor surrounded by VIP ticket holders.

Here are some pictures I took from my cozy little spot at the show:

I might be a bit biased because, as I mentioned, Justin Timberlake is my Day 1, but I highly recommend this show. The energy was through the roof, everyone involved is so incredibly talented, and I love how interactive JT is with everyone in the room. He really tries to give everyone an experience they’ll never forget.