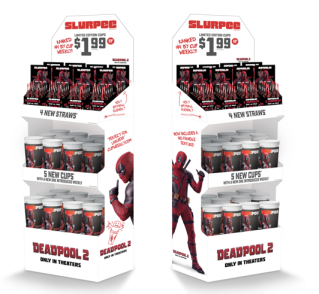 For super-fans who want to take it to the next level: “Meet Deadpool” via the 7-Eleven mobile app. The new AR experience literally brings Deadpool into the store, engaging customers with new surprise activities each week and the chance to win prizes including movie tickets, a trip to Las Vegas and more.

By scanning the 7-Eleven app at checkout, customers can earn 7Rewards® loyalty program points and enter a contest for a chance to win prizes such as movie tickets, a trip to Las Vegas and more. But the biggest news is the in-store AR that invites Deadpool fans to engage in fun virtual activities (new ones each week) to earn 7Rewards bonus points.

While Deadpool evokes “maximum effort” to fight the bad guys in the movie, jumping into the Deadpool AR experience at 7-Eleven stores is easy. All it takes is the 7-Eleven app.

Here’s how it works:

That’s the augmented reality part of the DEADPOOL 2 experience. The real-life part can be found in the exclusive items at participating stores.

“Deadpool definitely left an impression at their stores,” said Zachary Eller, executive vice president of Marketing Partnerships at 20th Century Fox. “Great to see that 7-Eleven has truly embraced the ‘creative genius’ that is Deadpool with this program.”

Here is the DEADPOOL 2 product mashup:

7-Eleven encourages fans to share their Deadpool experiences with photos on Twitter, Facebook and Instagram using the hashtag #DPx7E. Not a 7Rewards member? Customers can sign up for 7Rewards via the mobile website, 7Rewards.com, by messaging “7Rewards” to the Facebook Chatbot on Messenger, or by using a physical loyalty card. Customers can also pay via Apple Pay or Google Pay making their experience even more convenient.

SYNOPSIS: After surviving a near fatal bovine attack, a disfigured cafeteria chef (Wade Wilson) struggles to fulfill his dream of becoming Mayberry’s hottest bartender while also learning to cope with his lost sense of taste. Searching to regain his spice for life, as well as a flux capacitor, Wade must battle ninjas, the yakuza, and a pack of sexually aggressive canines, as he journeys around the world to discover the importance of family, friendship, and flavor – finding a new taste for adventure and earning the coveted coffee mug title of World’s Best Lover.