Lionsgate and Pantelion Films have released the new trailer and official poster for their upcoming, comedy film NO MANCHES FRIDA 2. 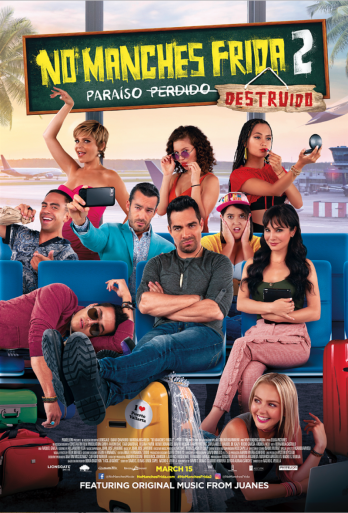 SYNOPSIS: In this over-the-top sequel to the smash hit No Manches Frida, the all-star cast of the original (OMAR CHAPARRO and MARTHA HIGAREDA) and some fresh new faces (ITATÍ CANTORAL and AARON DÍAZ) leave the school yard and hit the beach in NO MANCHES FRIDA 2! But there’s trouble in paradise… literally. When the seemingly reformed ex-con Zequi is about to marry the love of his life, the lovably nerdy Lucy, wedding day jitters turn into a full blown fiasco and Lucy calls the wedding off. Meanwhile, the school finds itself in deep trouble and the gang heads to the water to compete in the tournament of their lives. Once they’re all seaside, Lucy runs into her high school sweetheart Mario, whom since she last saw him has transformed into a smoking hot hunk. He’s coach of the opposing squad and Zequi finds himself a rival in more than one competition. Now he has to pull out all the stops to wrangle in his rowdy kids, win Lucy back, and in case that wasn’t enough, save the school from shutting down by leading Frida High to victory!