Ok, Jonas Brothers!! I see you!

Today marks the release of their new album, Happiness Begins, after 10 years! It’s been an extremely long 10 years for Jonas Brothers fans . . . believe me, as an *NSYNC fan, I know how uneasy it feels when your favorite band splits up. Especially when they’re brothers! Luckily, the guys worked through their issues and got together for one hell of an album!

When it was announced that the guys would be getting the band back together again, fans were hit with an onslaught of all things Jonas – a new single, a new album, a new tour, a documentary, a book, and who knows what’s next! There’s been no shortage of content, that’s for sure.

The documentary, Chasing Happiness, is available on Amazon Prime Video and gives an in-depth look at the guys growing up in the Jonas household, beginning their careers at a young age, navigating their way through life and work and family. Somewhere along the way, the guys seemed to lose the fun aspect of making music and performing, which eventually led to their split. They allow fans to get a glimpse into what happened and how they decided to work through things together as brothers. I highly recommend watching it.

With the release of the new album, we get to see a whole new Jonas Brothers. You can almost hear the fun in every song. It’s a more adult vibe than the old school albums, for sure. It’s funky, it’s mature, it’s a MOOD.  There’s literally something for everyone on this album, and a huge congrats goes out to the guys for coming back together while still holding onto their own individual styles in the process.

Personally, Jonas Brothers hold a special place in my heart. They were the first concert I ever took my niece to in 2009. She was 5 years old and it was amazing. My friend’s kids had fallen asleep towards the end of the show, so she took them out to the car, but my niece refused to leave until the show was over. It made me so proud! Since then, she’s been my concert buddy and now she’s 15 dragging me to shows I normally wouldn’t go to. They set the bar for live shows for her 10 years ago and now we’ll be seeing them EXACTLY 10 years later at their show here in Miami this August. My only wish is that I could afford VIP tickets for her to meet them lol.

Either way, make sure to grab the album, score tix to their upcoming Happiness Begins Tour (which is a bit pricey, but I’m sure it’ll be worth it), watch the documentary and keep your eyes open for their upcoming book! The guys are on a roll and it doesn’t look like there’s an end in sight. (Side Note: Someone please get them to convince *NSYNC to make a similar comeback! They’re living proof that maturing their sound and putting out music they want to make can work despite being a huge success to younger crowds back in the day!) 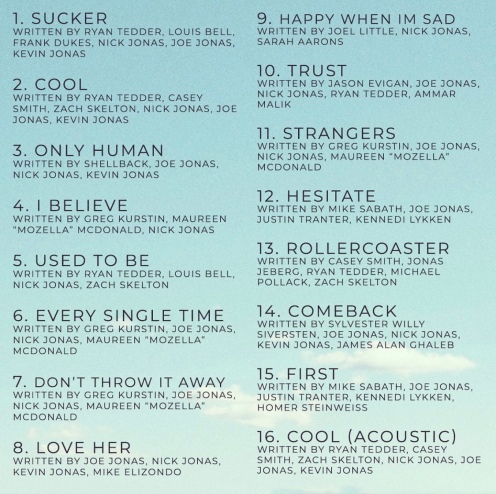