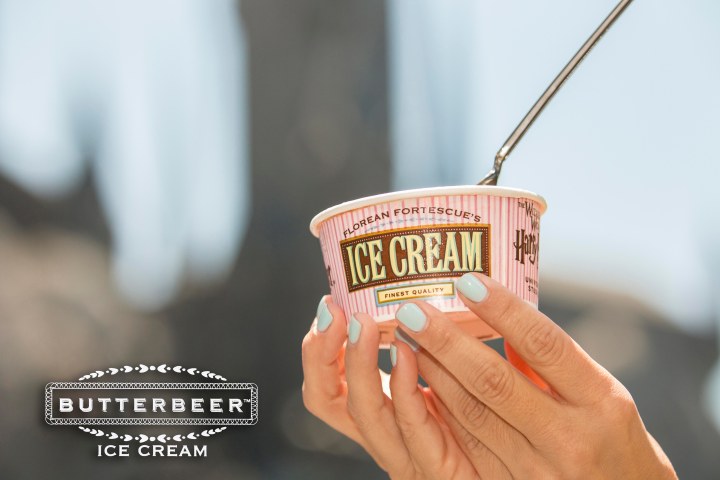 Here’s the scoop, Butterbeer™ ice cream is now being served at “The Wizarding World of Harry Potter™” at Universal Studios Hollywood™, arrivingjust in time for summer.

The rich palate-pleasing Butterbeer-flavoured hard pack ice cream is a delightful anddelicious new addition to the menu of Butterbeer items currently available, including such Butterbeer favorites as traditional, frozen and hot beverages, as well as Butterbeer Potted Cream and Butterbeer Fudge.

Reminiscent of butterscotch and shortbread, Butterbeer ice cream is perfectly fine-tuned as a cool Hogsmeade treat and will be served at various carts located within Hogsmeade and at Three Broomsticks™.

Inspired by J.K. Rowling’s compelling stories and characters that were brought to life in the Warner Bros. films, “The Wizarding World of Harry Potter” at Universal Studios Hollywood is a masterful recreation, faithful to the visual landscape of the fiction and films, including as its iconic focal point, Hogwarts castle.

From its snow-capped roofs and cobblestone streets to the historic British sensibilities that characterize the whimsical look and feel of the land, “The Wizarding World of Harry Potter” transports guests of all ages to the very places they watched on the silver screen.

The architecturally stunning land also includes the captivating and highly acclaimed “Harry Potter and the Forbidden Journey” thrill ride, enhanced with 4K-HD and ride film projecting at an astounding rate of 120 frames-per-second for an even more immersive glimpse into Harry Potter’s world, as well as “Flight of the Hippogriff™,” Universal Studios Hollywood’s first outdoor family coaster.

“The Wizarding World of Harry Potter” resonates with immense detail, inviting guests to enjoy authentic food and beverages at multiple locations, including Three Broomsticks and Hog’s Head pub, as well as the Magic Neep and Butterbeer carts.

A foray through the shops adds to the authenticity of the land with such retail venues as Honeydukes™, Ollivanders™, Owl Post™, Zonko’s™ Joke Shop, Wiseacre’s Wizarding Equipment, Dervish and Banges™, Gladrags Wizardwear, Filch’s Emporium™ of Confiscated Goods and the Hogsmeade™ Station.

About Warner Bros. Entertainment:
Warner Bros. Entertainment is a global leader in all forms of entertainment and their related businesses across all current and emerging media and platforms. A Time Warner Company, the fully integrated, broad-based studio is home to one of the most successful collections of brands in the world and stands at the forefront of every aspect of the entertainment industry from feature film, television and home entertainment production and worldwide distribution to DVD, digital distribution, animation, comic books, video games, product, and brand licensing, international cinemas and broadcasting.