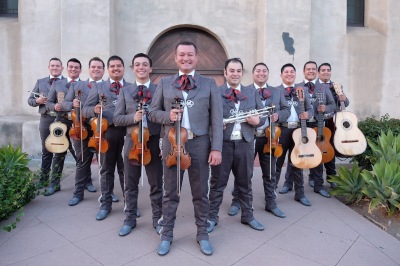 “Viva La Tradicion” has paid tribute to many of Mexico’s biggest icons, this year they pay homage to late Jose “Pepe” Martinez of Mariachi Vargas de Tecalitlán, who pioneered mariachi music in the U.S.

Pepe Jr. said that its going to be sentimental because he will be playing the music his father wrote and organized, music he has been listening to since he was a young child.

The tradition of mariachi music spans many years and can include music from various genres.

Founder Susie Garcia said that she looked up to Pepe Martinez because of the strong presence he gave Mariachi music world wide and its about time that he is paid tribute.

The partnership between Garcia and Pepe Jr. come together for the incredible “Viva La Tradition” two day event.

Pepe Jr. will be able to showcase music he has held close to his heart and have a special performance where he will share the stage with his late father in a special way.

Pepe Jr. said he will do a song, “A Mi Manera,” “My Way” by Frank Sinatra, where he will sing with along side the voice of his late father.

Garcia said that after the past “Viva La Tradition” sold out and the fact that this is an event for the family to enjoy together, it was only logical to have two nights.

Performers at “Viva La Tradition:”
Mariachi Ángeles de Pepe Martínez Jr.
For more than 30 years, Jose “Pepe” Martínez Jr. has lived on stage inspired by the gift of music introduced to him as a young boy. His biggest teacher and mentor was his own father, most affectionately known as Don Pepe. With 25 years as a leading member of Mariachi Vargas de Tecalitlán, Pepe Jr. now brings his experience, professionalism and leadership to his new group Mariachi Ángeles.

Steeven Sandoval is a ranchera music singer who was a shining star in two of the best mariachis of the world: Mariachi Vargas de Tecalitlán and Mariachi Nuevo Tecalitlán founded by Don Pepe Martínez.
Steeven is considered one of the most iconic voices in mariachi music and is best known for his classic renditions of “Por Amor,” “A Los Cuatro Vientos,” and “Te Huberias Ido Antes,” among others.

Las Colibrí or “The Hummingbirds” has a passion for music, beauty, and girl power. This all-female group is flying into new territory as one of the most unique ensembles of its genre by returning to the all-string instrumentation of the early 20th century mariachi tradition and the colorful, feminine costumes of the Mexican cinematic divas of the ’40s and ’50s.

Ballet Folklorico Ollín is a nonprofit cultural organization founded in 1972 with the primary goal of preserving and interpreting the diverse cultural beauty of México re-created here in California through music, dance and folk traditions

Mariachi Jaguares De Mendez High School are comprised of LAUSD students with great enthusiasm and love for Mexican tradition and boasts a very inclusive ensemble, proving that the most severely disabled can also demonstrate their passion for mariachi music.

Where:
Ford Theatres
2580 Cahuenga Blvd. East
Hollywood, CA 90068
(just off the 101, between Hollywood and Universal Studios in the Cahuenga Pass)

Pricing:
Ticket prices start at $45; Reserved seating. Tickets are available at FordTheatres.org or 323-461-3673 (for non-visual media 323-GO-1-FORD). To learn about discounts for groups of 10 or more, please visit FordTheatres.org.